Home / Incident / The collapse in the mine in the Lviv region: there are victims

The collapse in the mine in the Lviv region: there are victims 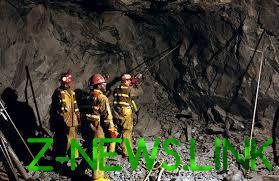 There is information about the three victims.

In the Lviv region in the village Vilece there was a collapse of breed on mine “Lisova”. As a result of the collapse injured three miners. This became known from the message of Department of civil protection of Lviv.

The exact causes of the accident are specified. All the victims were taken to the hospital with injuries of varying severity.