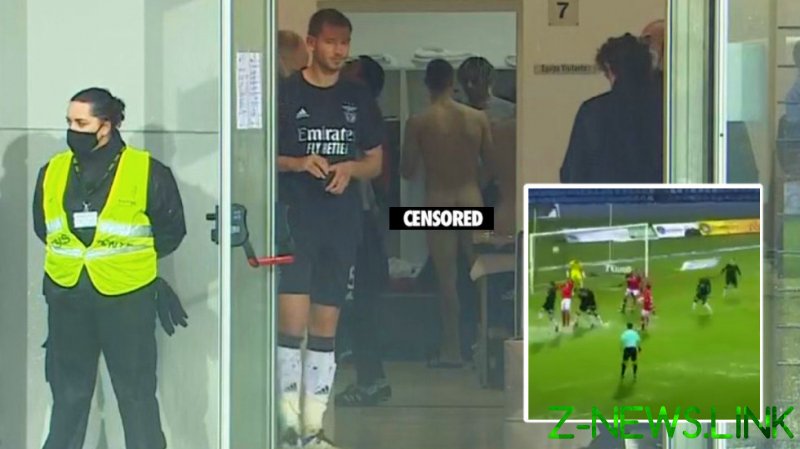 The clip came soon after Benfica’s match at Santa Clara was abandoned with just six minutes gone due to storm conditions weather.

In an apparent bid to fill time on the broadcast, the local television network sent a cameraman into the depths of the stadium to collect some shots of both teams – and in the case of Benfica’s dressing room, the viewers got a whole lot more than they bargained for.

Both teams retreated to their dressing rooms when play was halted and, in at least one case, opted to strip out of their wet kits and into drier and warmer clothing.

Unfortunately for one player, though, he did so at the exact moment when directors cut to the Benfica dressing room, showing the player displaying his backside to the tens of thousands watching at home.

Former Tottenham defender Jan Vertonghen, who we must stress was fully clothed, was also seen peeking out of the dressing room as others joked with one another and played with their phones.

And if some of those players logged into their social media accounts, odds are they might have seen their teammates’ rear-end displayed for the world to see, as several eagle-eyed fans quickly reproduced the x-rated incident online.

There was also another potentially embarrassing moment for another naked player who wandered into the frame, but luckily for him he hid his modesty behind a towel just before coming into shot.

This was no laughing matter for the Benfica hierarchy. Sporting director Rui Costa soon burst into the locker room after being made aware of the incident and demanded answers for the faux-pas, showing the footage to a reporter under an umbrella outside before the broadcaster issued an apology.

One Twitter joker shared the scene and drily described it as “highlights” of the match.

A fan in a more serious mood fumed: “It actually makes my blood boil that Rui Costa was so upset at that ass being on TV than Benfica’s deplorable performances week in week in.

“I’m more annoyed that that guy is so comfortable butt naked when a woman [steward] is standing right there and doesn’t need to see some man’s ass.”

The match will be replayed on Monday evening after forecasts suggested that the weather which forced Sunday’s postponement will have mostly cleared.

Benfica require a win to move within two points of Portuguese league leaders Sporting Lisbon. Perhaps more than that, they will be hoping that all of their players remain fully clothed while doing so.