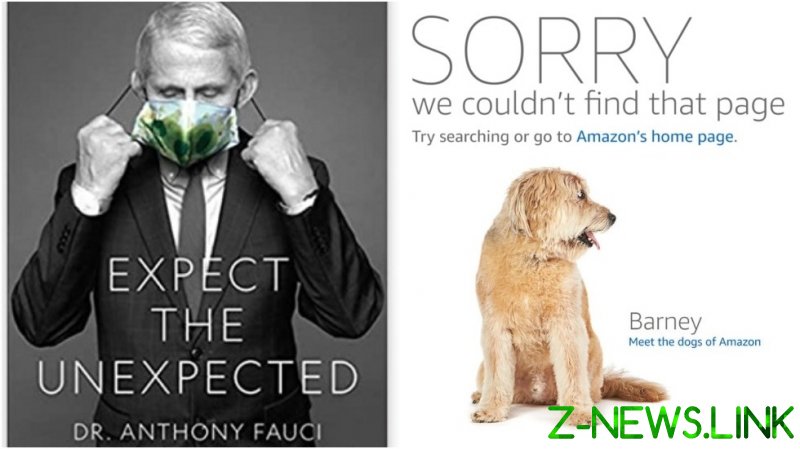 Searches for ‘Expect the Unexpected: Ten Lessons on Truth, Service, and the Way Forward’ on both Amazon US and Barnes & Noble booksellers returned “page not found” results on Wednesday.

No official explanation was offered by either company. Fauci’s publisher, National Geographic Books, said in a statement that the book was taken down because it had been “prematurely posted for pre-sale.”

They also said the book was being developed “in connection” with the upcoming National Geographic documentary about Fauci, and that he would not be earning any profits or royalties from it.

However, the website of National Geographic Books made no mention of Fauci’s book, not even as an upcoming release (unlike several others, some still lacking titles). ‘Expect the Unexpected’ book was also still available for preorder on Amazon’s overseas websites – UK, Germany and Japan – as well as the Australian retailer Booktopia.

Announced Tuesday for publication on November 2, the book was supposed to be a compilation of interviews over Fauci’s 34-year career as director of the National Institute of Allergy and Infectious Diseases, and discuss his role in leading the US response to the Covid-19 pandemic.

“Those looking to live a more compassionate and purposeful life will find inspiration in his unique perspective on leadership, expecting the unexpected, and finding joy in difficult times,” said the overview at the Barnes & Noble website, now removed. It had also described Fauci as “America’s most trusted doctor.”

What changed between Tuesday and Wednesday was the publication of a massive cache of emails to and from Fauci, obtained through a Freedom of Information Act (FOIA) request by BuzzFeed. While it and other corporate outlets – such as the Washington Post and CNN – put a positive spin on the revelations, internet sleuths quickly posted screenshots of emails that painted an entirely different picture.

Among them was Fauci’s correspondence with Peter Daszak, head of the EcoHealth Alliance nonprofit, thanking the bureaucrat for “publicly standing up and stating that the scientific evidence supports a natural origin for COVID-19 from a bat-to-human spillover, not a lab release from the Wuhan Institute of Virology.” Daszak was working with the WIV to research bat coronaviruses, using money given to EcoHealth by Fauci’s institute.

Another shows his deputy Hugh Auchincloss telling Fauci about a 2015 report on gain-of-function research on a “SARS-like cluster of circulating bat coronaviruses,” adding that he was looking to establish “if we have any distant ties to this work abroad.”

Fauci famously denied that his institute had any role in any gain-of-function research last month, when grilled by Senator Rand Paul (R-Kentucky) in the latest of their many committee clashes.

Unnamed Trump administration officials also reportedly claimed Fauci was the key force behind the US government lifting a longstanding ban on such research – back in December 2017, when the Department of Health and Human Services issued a revised gain-of-function guidance though it was under an acting secretary at the time.

Fauci, reportedly the highest-paid official in the US government, was a key player on the White House coronavirus task force during the Trump administration, advocating for lockdowns, mask mandates and school closures. He has been a fixture on cable news channels and magazine covers, and has come to be regarded by Democrats as the highest authority on how to deal with the pandemic. President Joe Biden elevated him to his chief medical adviser.