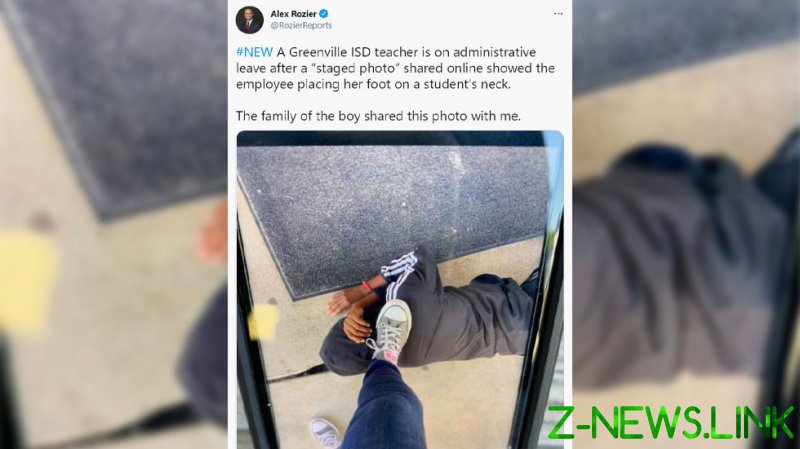 The unnamed teacher reportedly sent the photo – which shows the boy on a hard floor as the teacher puts her foot directly on his neck – as a joke to his mother, with whom she was friends, on the same day former police officer Derek Chauvin was convicted of murdering black man George Floyd by placing his knee on his neck.

The photo was then posted on social media and started to circulate.

His mother told NBC 5 that, though she originally “didn’t think anything of it,” and laughed and “moved on,” the picture “then began to bother” her, and after she showed it to the rest of her family they “got really upset about it.”

“I didn’t like it from the moment I seen it,” said the boy’s dad, while his uncle added, “With what’s going on in the world right now, that ain’t nothing to play about at all… Whether he agreed to do it, she asked him to do it, it don’t even matter. He’s 10. He don’t know no better. She do though.”

The mother, however, said that the teacher is “not a racist” and didn’t have any ill intent.

Though the boy’s mother asked Lamar Elementary not to fire the teacher, the Greenville Independent School District is taking the incident “very seriously” and has placed her on administrative leave pending an investigation.

Calling it “a highly upsetting picture,” Greenville ISD said the teacher would be “thoroughly investigated, and appropriate action will be taken.”

Greenville ISD Superintendent Demetrus Liggins also condemned the teacher’s actions, saying, “My initial reaction was disgust… That is not who we are. That picture does not define our teachers, it does not define the way we treat our students.”