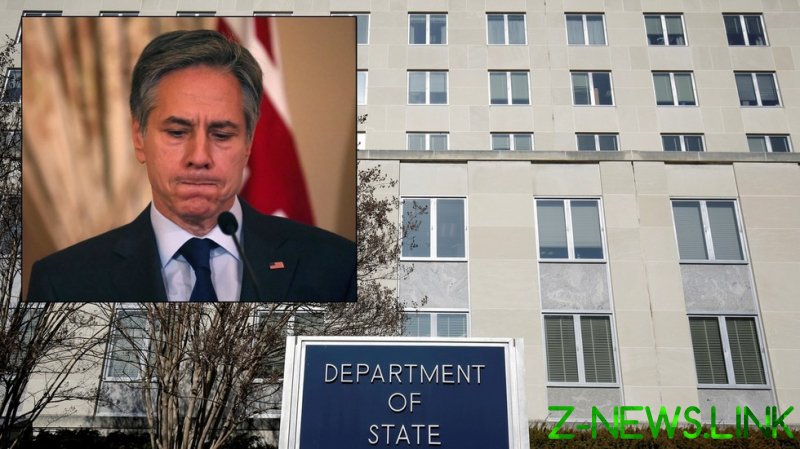 “Unfortunately, late yesterday a swastika was found carved in an elevator in our building here, at the State Department,” Deputy Spokesperson Jalina Porter told reporters on Tuesday.

“This graffiti has been removed and the incident will be investigated,” she added.

The crudely carved symbol was discovered inside Elevator 36 at the State Department headquarters in Foggy Bottom late on Monday, Axios reported on Tuesday with an exclusive photo. The elevator is reportedly near the office of the US Special Envoy to Monitor and Combat Antisemitism.

Blinken, who is Jewish, is currently on a trip to Kuwait and India. He sent an email to the State Department employees on Tuesday, calling the “hateful graffiti” a painful reminder that “anti-Semitism isn’t a relic of the past.”

“It’s still a force in the world, including close to home. And it’s abhorrent. It has no place in the United States, at the State Department, or anywhere else. And we must be relentless in standing up and rejecting it,” Blinken wrote.

“We also know from our own history and from the histories of other nations that anti-Semitism often goes hand in hand with racism, sexism, homophobia, xenophobia, and other hatreds. None of these ideologies should have a home in our workplace or our nation,” the secretary added.

Gilad Erdan, Israeli ambassador to the US and the UN, also commented on the discovery, calling the State Department swastika “a serious incident of antisemitic vandalism, which once again shows that antisemitism does not distinguish between Jews in Israel and Jews in America, and harms not only Israel but the entire world.”

According to Axios, the defaced elevator “raises troubling questions about security” at the State Department. All of the elevators inside the complex are inside the secure perimeter, covered by cameras and uniformed guards. There are fewer employees on premises than usual, since many State Department staffers continue to work from home on account of the coronavirus pandemic. Any outside contractors allowed access are supposed to be vetted by the Diplomatic Security Service. All of this should make it easy to identify the culprit, though that has not happened yet.

Jewish groups have also lobbied the White House for a stronger response to anti-Semitic attacks in the US, which they tied to the recent violence in Israel and Gaza.