Home / WORLD / ‘Smeared, shut out & shadow-banned’: the inside story of how RT was branded a ‘foreign agent’ by free press-loving US officials

‘Smeared, shut out & shadow-banned’: the inside story of how RT was branded a ‘foreign agent’ by free press-loving US officials 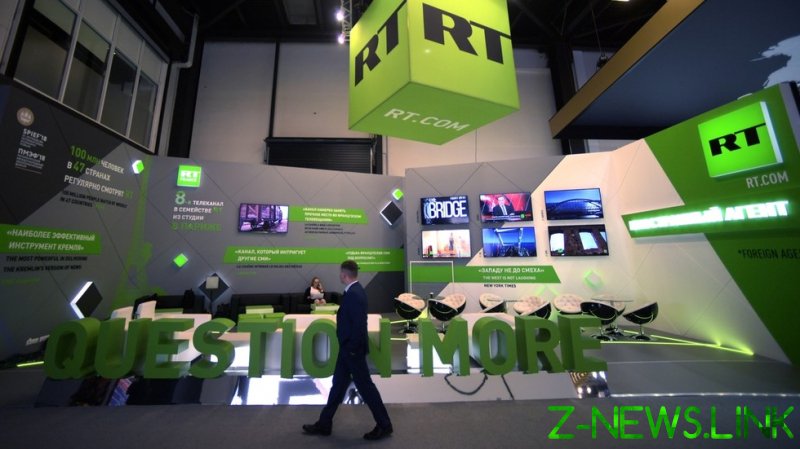 Speaking at a roundtable on press freedom at the St. Petersburg International Economic Forum on Thursday, Anna Belkina, RT’s deputy editor in chief, set out how American legislation was limiting the multinational news agency’s work in the country, which bills itself as the leader of the free world, and elsewhere.

Her comments came as foreign ministry spokeswoman Maria Zakharova defended Russia’s own laws that require domestic outlets funded from overseas to display their status to the public. The move again hit headlines this week, after Dutch state-funded VTimes, labelled just weeks ago as a ‘foreign agent,’ folded, citing the risk of falling foul of the rules and potential prosecution of its staff.

For years, RT’s lawyers, consultants and even representatives of the US government had repeatedly reassured the network’s bosses that it would not be listed under America’s own stringent foreign agent requirements. Then, to rub salt into the wound, when the status was imposed anyway, officials insisted in public that its activities would not be restricted by its status.

However, Belkina said, “as soon as the ink was dry on RT America’s designation as a “foreign agent” in the US, our credentials were taken away by the Executive Committee of the Congress Radio & Television Correspondents’ Galleries. The Executive Committee cited the registration – effectively denying our journalists access to not just Congressional events, but essentially all federal offices, party conventions and other political events, which are the mainstay of every news channel.”

“RT America’s broadcasts had to start carrying a “foreign government” label,” she added, and “we lost long-term partners in various operational areas – including getting kicked out of the largest distribution and broadcasting networks in the US – because working with a “foreign agent” became a risk factor for them, as this designation has a creeping effect that imposes registration requirements on those working with a registered entity in some cases.”

US state-run media outlet RFERL has opposed its own designation by Russia’s Ministry of Justice as a ‘foreign agent,’ which requires it to display the status prominently to readers. Its leadership maintains that it is an editorially independent news outlet. However, Belkina contested this, pointing out that “while RT is an autonomous organization, RFERL is part of the US Agency for Global Media (USAGM). The very first of USAGM’s official broadcasting principles is that its news content must “be consistent with the broad foreign policy objectives of the United States.”

That founding statement, she pointed out, makes RFERL “an official tool of the US Department of State, and yet, until the measures against RT started in the US, they were free to operate in Russia without any such designation. Even post-designation, they continue to operate freely.”

It is a fairly open secret that state-backed broadcasters will tend to side with the status quo in the country they come from. Challenged on whether any such media group could ever be truly independent, Belkina said that it is “only natural for an international news broadcaster to reflect the perspective of their country of origin to some degree. RT has never hid its Russian origins, in fact our own website says that the network “acquaints international audiences with a Russian viewpoint on major global events.” The BBC, for example, also does so proudly – its now-ex Director General, Tony Hall, said just last year that “no one can do more to carry Britain’s voice and values to the world” than the BBC.”

“The BBC,” she argued, “like RT, is a publicly funded broadcaster, but unlike RT, the BBC World Service also receives money from arms of UK Government aligned directly to Foreign Policy and Defense, namely the UK Foreign Office. Yet, somehow the BBC is not labeled as a foreign agent in the US. Neither is DW or France 24 or Al Jazeera.”

“So, such selective labeling – particularly of a channel based in the US, staffed by Americans covering American news without ever giving a single thought to the ‘Russian perspective’ – simply because it just doesn’t apply there – makes it clear that this isn’t about transparency, but about politically-motivated discrimination,” Belkina claimed.

“But, there is also something I would call a false inequivalence, in that private or corporate news organizations are somehow seen as more objective, devoid of political interests and agendas. I think that is simply false. You cannot tell me that it is by some miraculous coincidence that CNN International coverage always lines up neatly with the US foreign policy of the moment.”

RT has been repeatedly accused by Western commenters and politicians of being part of Russian state efforts to weaponize news media to achieve its political goals. Belkina, however, dismissed the suggestion out of hand, insisting that the country “has been accused of weaponizing everything from Eurovision and its own economy, to dolphins: literally. All this is, is an attempt to silence an inconvenient voice that dared to cover stories ignored by others, to dissent from the establishment narratives of how the world works, of who the good guys and the bad guys are, and therefore breaks the Western mainstream media’s decades-long monopoly on information. But that is precisely why our readers and viewers come to us.”

Media freedom has become an important and popular cause for journalists and card-carrying human rights activists across the world. However, Belkina argued that these self-declared champions of free speech seem uninterested in defending the outlet as it grapples with restrictions overseas. “Those that are now the loudest in bemoaning the actions by Russia and calling for journalistic solidarity – like the bureau chief of Radio Svoboda at this week’s SPIEF 2021 event on Foreign Agents – were at best conspicuously silent when RT’s press freedoms were being trampled upon in the US and elsewhere, and continue to remain so,” she said.

“They claim that what is happening in Russia “is different” (it isn’t). RT was banned from a conference on media freedom, the secretary general of Reporters Without Borders, an organization that is supposed to advocate for journalists, called RT “enemies of journalism”, various media outlets, instead of showing solidarity, continue to advocate for RT to be banned outright, or mount pressure campaigns against our hosts or business partners,” Belkina added. “To this I say, you reap what you sow.”

Heavy-handed state legislation imposed on media outlets is, however, only one part of the equation. With news sites and broadcasters increasingly reliant on social media and other digital platforms to drum up audiences and reach out to readers, there are concerns that privately-owned tech giants are playing too great a role in shaping the media that people read and access.

“If an American platform [such as Twitter, Facebook or Instagram] can ban a sitting US President,” Belkina said, “just think of what they can do in other countries where they are free from repercussions. And, they already do – for example with Twitter removing RT from unrestricted search if you are not already a subscriber, or Facebook removing absolutely compliant RT content without explanation.”

“I would say that most countries have already appreciated the risks in letting those platforms control international information flow without public accountability, and are wrestling with what to do about it. Russia is too.”

Moscow has repeatedly said it is considering taking steps against tech giants that restrict Russian content, while applying double standards to news reports and posts from other outlets. At the same time, as Zakharova pointed out on Thursday, it has introduced its own measures in “retaliation” to the US ‘foreign agent’ law. However, she said, any suggestion this step is “somehow an attempt to prevent international media from working is not true.”

President Vladimir Putin has previously publicly defended the move as an essential step to ensure readers know content has been financed from abroad. “What’s wrong with the foreign agent status? We’re not the ones who came up with it,” he said, citing the US’ policy precedent. According to him, the law “exists simply to protect Russia from external meddling in its politics,” and, while some countries forbid foreign meddling outright, “we do not ban it.”