Home / WORLD / Russia’s elections are an all-important test for Putin’s party. But can opposition activists in the sunny south beat voter apathy?

Russia’s elections are an all-important test for Putin’s party. But can opposition activists in the sunny south beat voter apathy? 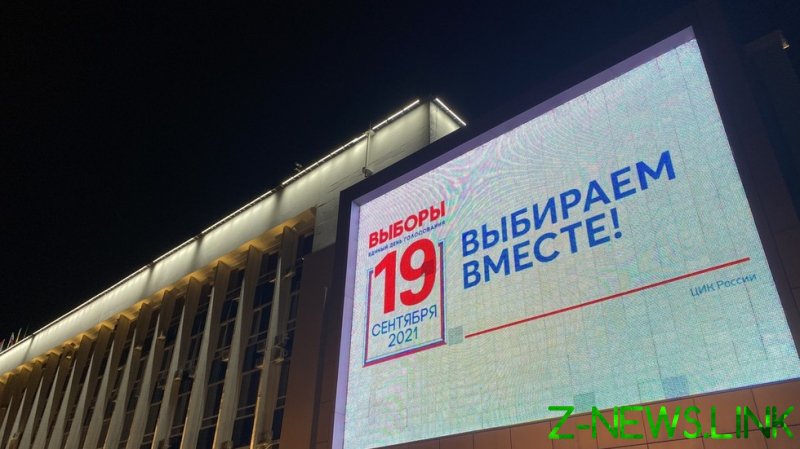 However, not everyone in the fast-growing southern city seems to have gotten the message. “When does the election actually start?” Bogdan, a 21-year-old student asked. He hasn’t decided who he wants to cast his ballot for yet ‒ or if he’ll go to the polling station at all. “Life is beautiful here,” he declares, “it’s the best city in Russia.”

Winning over people like him is crucial for those looking to shake the Kremlin’s hold on power. With an average age several years younger than the rest of the country, the population of Krasnodar has soared as workers and young families move toward the coast in search of a better quality of life. The buzzing bars, restaurants and boutique shops in the center draw people in, while the outskirts echo with the sound of construction as new apartment blocks are put up to meet the demand. Many locals point out that necessary infrastructure isn’t always prepared to meet the needs of the growing population.

But if opposition activists are hoping Krasnodar’s demographics and relative prosperity mean their politics receive a warmer welcome, they are facing an uphill struggle. The south as a whole is a stronghold for the governing United Russia faction, and its candidates attracted nearly 60% of all ballots at the last legislative elections in 2016. Openly endorsed by President Vladimir Putin, the party of power is relying on residents in places like this to turn out in high numbers to again secure their super-majority in the State Duma, allowing constitutional reforms to be passed without borrowing votes from other groupings.

The signs in the lead-up to polling day haven’t been encouraging for United Russia, with indicators suggesting support has fallen well below where it was the last time around. Boris Makarenko, the president of the Moscow-based Center for Political Technologies, says that electoral mathematics “guarantee it a simple majority,” but that United Russia’s absolute hold on power could be called into doubt.

Opposing candidates smell blood, and none more so than the Communist Party (KPRF) ‒ the successor to the entity of the same name that ruled the Soviet Union from revolution to collapse. Its supporters say its popularity is now almost level with United Russia, and their sights are set on a big win this time around, exploiting frustrations over slow wage growth, rising prices and often-unpopular Covid-19 restrictions. The party’s rallying cry, plastered over billboards, has become “Russia needs a vaccine against capitalism.”

One of its candidates in the Krasnodar region, Alexander Safronov, explained he was equally optimistic about the party’s chances locally, given that the city has expanded rapidly and public services have struggled to keep up. “Neighborhoods are being built, but virtually no schools, kindergartens or polyclinics are under construction,” he said. “The very rich are getting richer, and the people are getting poorer.” 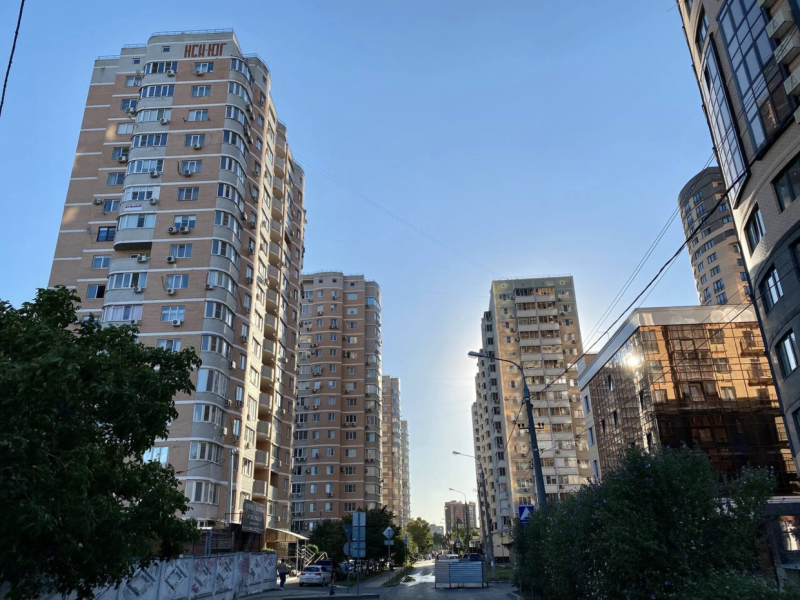 Apartment buildings line a road outside the center of Krasnodar. The city is one of Russia’s fastest growing.

The politics of inequality doesn’t seem to have captured the imaginations of young people like Bogdan, however, and Safronov admits his support generally comes from those aged between 40 and 65. His pitch is that the public have lulled themselves into a false sense of security, and are really victims of a broken economic system. “Look at our capitalism,” he said over coffee in the bustling city center. “Yes, on the one hand, from the outside, you see people own cars and apartments – but these are bought on credit and people have sold themselves into slavery for 20 or 30 years.”

Another party that hopes to do well out of social discontent is the Yabloko movement. Founded in 1993 to put forward a pro-Western, socially liberal vision of Russia in the country’s first post-Soviet elections, it has failed to win any seats since 2007. A victim of the 5% threshold for gaining proportional representation in the Duma, a rule originally borrowed from the German system, its candidates are hoping their message finds more support as a new generation comes of age to vote.

Like Safronov, Artur Lipsky, a young musician volunteering for Yabloko’s campaign in Krasnodar, has found it frustrating that local issues like transport, education and infrastructure haven’t translated into higher levels of support for a change in leadership. “Where I live, there are rows of new buildings – homes – that have been built in recent years. They haven’t even been connected up to the sewage system yet,” he explained. 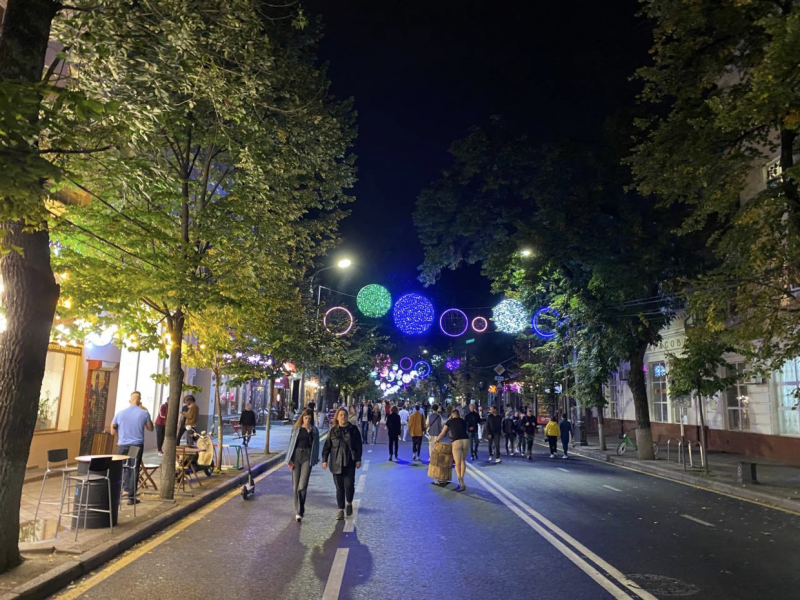 Krasnodar’s main street is closed to traffic on the weekends, allowing young people and families to walk down it, as crowds spill out from local bars.

And yet, among those who have moved south to build a new life in the region from scratch, “many aren’t political – they’re not likely to vote. They’re too busy or they don’t see a reason,” he said. The view that politicians can’t, or won’t, improve their lives – that only the people can – comes with the sense of rugged individualism that those upping sticks and settling developing regions often have, in Russia as in much as the US.

While he acknowledges his party still has relatively limited support among the general public, Lipsky believes that its candidates are still facing underhanded tactics to prevent it from reaching the number of votes it needs. Just last week, Yabloko’s leader on St. Petersburg’s city legislative community sounded the alarm after two other men, curiously also named Boris Vishnevsky and resembling the politician in election literature, were accepted onto the ballot. His supporters see those changing their names and declaring their candidacy as an effort to split the vote, while Ella Pamfilova, chairwoman of the Central Election Commission, blasted the situation as a “disgrace,” saying “it makes a mockery of the voters.”

However, the activist believes public opinion, deep down, is on the side of those calling for a rapprochement with the West. In a recent poll from the Levada Center, registered as a ‘foreign agent’ by the country’s Ministry of Justice over overseas funding links, the majority of 1,600 Russians surveyed said they weren’t too worried about geopolitics. Around two-thirds said they want to see their homeland become “a country with a high standard of living, even if it is not one of the most powerful countries in the world.” Only one in three said it has to be “a great power respected and feared by other countries.”

Despite the substantive splits in public opinion, many foreign analysts allege that the elections don’t offer a real or genuine choice of different visions for Russia. In parliament, both the KPRF and the right-wing LDPR have frequently supported government policy, leading to claims they aren’t serious about winning power from United Russia. Away from the deal-making in Moscow, however, the disagreements in local races are often substantive and fierce. 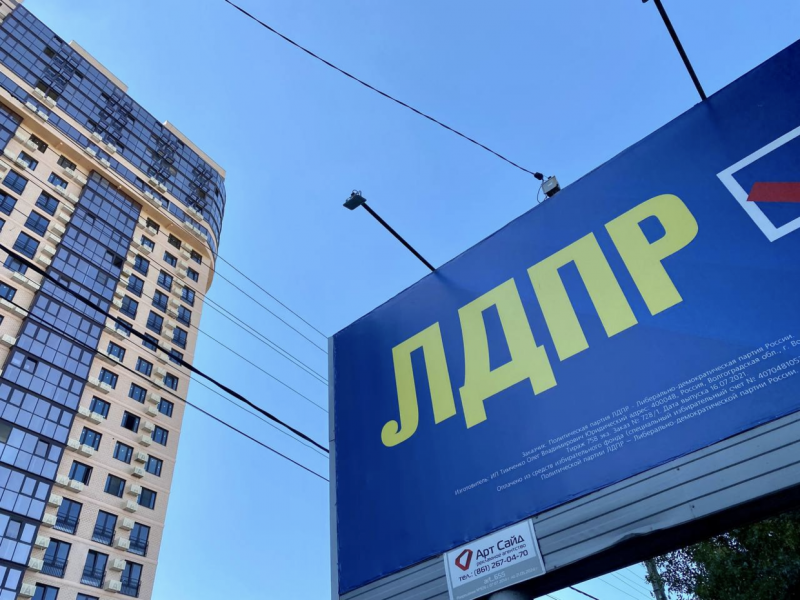 An advertisement encourages people in Krasnodar to vote for the right-wing LDPR party.

“We believe the budget should be different, education policy should be different,” Safronov said. According to him, the governing party’s “fickle supporters come to their headquarters, take a photo and leave… I go to the courtyards, sit with people, talk to them and hand out leaflets.” At the same time, he points to unconfirmed recordings that he claims shows Krasnodar’s governor, Venyamin Kondratyev, conspiring to use hacked data to beat back the KPRF’s ground operations. While the region’s top official, and his aides, categorically deny the charges, the furor is at least a sign that Russian parties aren’t all as in league with each other as many foreign observers claim.

Of the 14 parties with candidates up for election this week, United Russia may benefit from low turnout, as was the case in previous elections. The 2016 vote saw a record drop in the number of ballots cast, with more than half of people not bothering to vote. Despite that, the governing party’s strategy doesn’t appear to be based around hoping people stay home, with paid advertising along Krasnodar’s highways and a stall set up on its busy central street.

Students Amina and Arewa are among the activists handing out campaign literature, badges and wristbands. “It’s about 50-50,” Amina said when asked whether fellow students looked down on her activism, “many people just don’t care.” Lipsky, however, insists that virtually no young people are involved with any of the major parties, and that those handing out leaflets are almost always paid for their time. 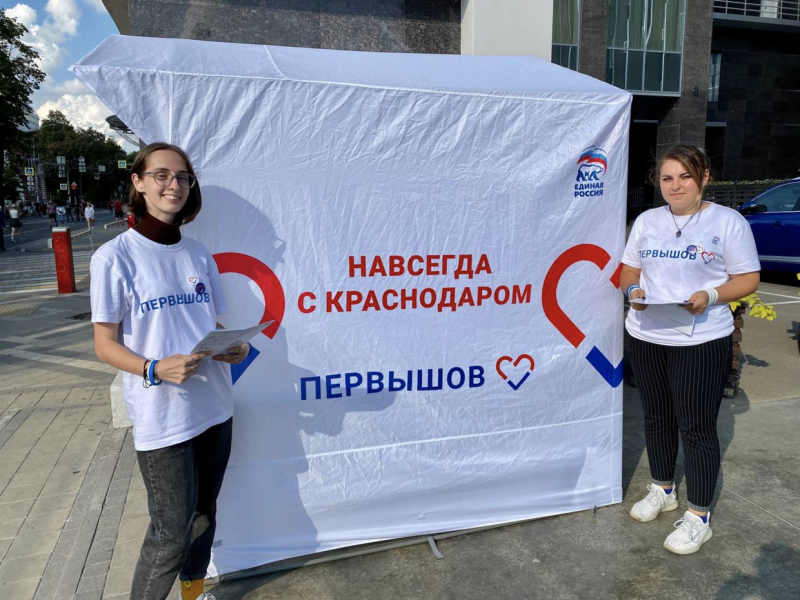 Students Amina and Arewa hand out a letter from the region’s governor on Krasnodar’s main street.

Another effort to increase turnout, offering lottery tickets to win cars and apartments for those voting online, has sparked suspicions among some that the system is rigged in favor of the incumbent government. But, for all the talk of election irregularities, international monitors from the OSCE said that the last elections were among the cleanest yet, despite starting from a low base for democratic standards, like all former Soviet nations. That said, this election will go largely without OSCE observers, ostensibly after a row over the numbers allowed into polling stations and counts, given the Covid-19 pandemic.

Russian authorities have also come under fire, in the West, for cracking down on the so-called “Smart Voting” campaign, designed by allies of jailed opposition activist Alexey Navlny to maximize the effectiveness of anti-government ballots. However, few outside of Navalny’s committed and relatively small band of highly motivated activists seemed to have heard of it, and none of those that could stand to benefit from such an endorsement brought it up as a helpful move.

Likewise, Andrei Pivovarov, a veteran oppositionist running for parliament in Krasnodar from behind bars, facing charges of working for a banned organization, has told reporters that he knows his chances of attracting large numbers of votes is slim. Nonetheless, his campaign is hoping to mobilize the small proportion of people motivated enough to vote, but with no faith in other opposition parties.

But apathy and cynicism about the prospect of change, and a general sense that the country is moving in the right direction as it is, is more likely to define this week’s polls. Research published in recent days, again by the Levada Center, found that while one in six Russians want to move toward “democracy according to the model of Western countries,” around 18% said “the current system” was preferable.

Both groups, however, pale in comparison to the 49% of respondents who said they would happily return to “the Soviet system, like we had until the 1990s.” Even 30% of 18-24 year olds, who never lived under the kind of rule they are nostalgic for, said that it was their preferred option. A political system routinely upended at the ballot box, it seems, is low on the list of priorities for most people.

That doesn’t mean that half of Russians will turn out to vote for Marxist candidates but, in a country where political instability and turmoil cost an entire generation its future only three decades ago, stability comes at a premium and faith in ideology is a rare thing. Cities like Krasnodar represent the bright shoots of recovery in a country that has spent decades reeling from the collapse of the USSR. Few seem to believe it should, or can, change track now.