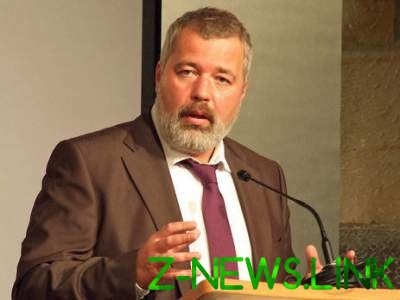 The Deputy of the state Duma of the Russian Federation can consist in different groups.

Chief editor of “Novaya Gazeta” Dmitry Muratov said that state Duma Deputy Natalia Polonskaya is a member of a group which included a lot of military and former security officials.

The Deputy of the state Duma of the Russian Federation Natalia Polonskaya is a member of the Imperial group, which is characterized by power manners, inflexibility and intransigence. About it on air of radio station “Echo of Moscow”, said the chief editor of “Novaya Gazeta” Dmitry Muratov.

“Poklonskaya is part of one of the radical groups within the Orthodox Church, the Russian Orthodox Church. This Imperial such grouping, which is the cult of the Emperor. In this group a lot of the military, in this group many of the former security forces,” he said.
The journalist noted that this group cannot be regarded as Orthodox Taliban, however, she is tough, and action.

“They are ideologues, in many public organizations, that they now have their representation in the State Duma of the Russian Federation in the person of Ms. Poklonskaya – this is absolutely… This is a new Vice, the religious police. And what is moral and what is not moral, for the whole country to determine them. Not for himself, not for his own behavior, not for his own community and circle, and for all of us,” he said.

Muratov added that the group Poklonskaya exports its understanding of religiosity and morality in the whole of Russia.
“They fill up as gas, so empty space is all that is the case entirely. And ROC is not in a hurry, never in a hurry to dissociate themselves from them. The ROC is now a lot of questions on ownership, the process of transmission there tasty good assets. And this group, and in this sense plays its very significant role,” – said the chief editor of “Novaya Gazeta”.

The journalist noted that the Director Alexei Uchitel has become a target of this group and the movie “Matilda”.

“We are not dealing with a manic woman – maybe she thinks that she is a relative of the Emperor. There is I have deep feeling because she was carrying his portrait on the action “Immortal regiment”, where people carried their closest relatives killed in the great Patriotic war. So, apparently, Russia considers itself the successor, it means that she considers herself a relative. Maybe it’s some mysterious family history? But it’s all for melodrama. And in this case we are already actually fighting organization,” he concluded.

Director Teacher claims that Russia supports and provides cover for a terrorist organization, and the protests against his film “Matilda” are the only reason for this organization to Express themselves.