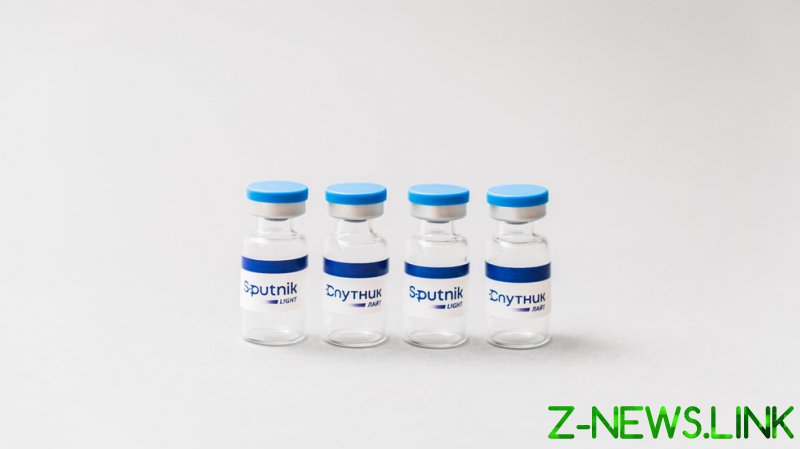 Sputnik Light is the first component of the widely used Sputnik V coronavirus vaccine, its researchers explained. However, the single dose has shown 79.4% efficacy, which “is higher than that of many two-dose vaccines,” the developers said in a statement.

Researchers have analyzed the efficacy rate based on data received from Russia’s mass vaccination program between December 2020 and April 2021. Having studied data taken 28 days after a single injection was administered, they said the infection rate among one-time vaccinated people was just 0.277%. The unvaccinated adult population showed 1.349% infection rate over the same period.

The scientists behind the vaccine say it’s effective against new Covid-19 strains. Antibodies neutralizing the deadly virus were activated in over 91% of recipients on the 28th day post shot. It is also said to provide absolute protection against severe cases of the disease. Following the trials, no serious side effects have been registered, Sputnik Light researchers report.

Developers hope the single dose will help provide faster immunization among larger numbers of people. “The single-dose regimen solves the challenge of immunizing large groups in a shorter time, which is especially important during the acute phase of the spread of coronavirus, achieving herd immunity faster,” said Kirill Dmitriev, CEO of the Russian Direct Investment Fund (RDIF), which funds the vaccine. He also pointed out that Sputnik Light “has an affordable price of less than $10,” and can be easily transported and stored.

Sputnik V, which has been registered in more than 60 countries worldwide, will remain Russia’s main vaccine, while the new light shot is expected to help deal with peaks of the disease and increase vaccination rates. It is also intended for wider international use.

Alongside the Sputnik vaccines, two other Covid jabs, EpiVacCorona and CoviVac are registered in Russia. Researchers have also been working on a Sputnik V nasal spray. Some 13.4 million Russians have received at least one shot, Deputy Prime Minister Tatyana Golikova reported on Thursday, adding that 9.4 million people in the country have been fully vaccinated.