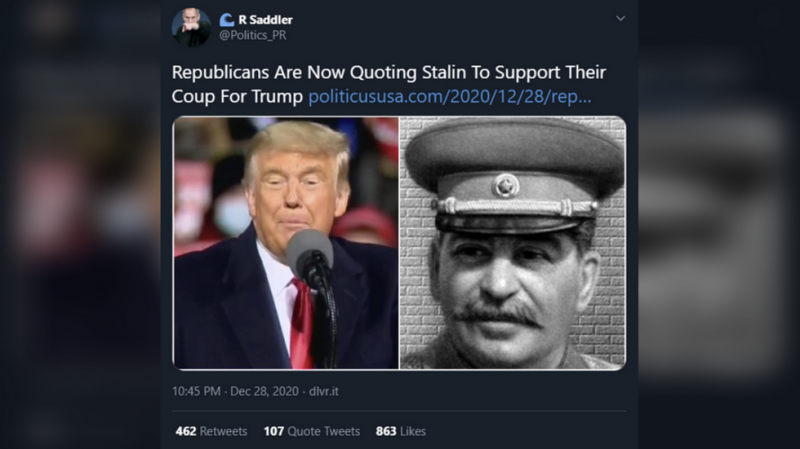 “Those who cast the votes decide nothing. Those who count the votes decide everything,” says the quote, which Stalin may or may not have uttered, that opened a five-tweet thread posted by Rasmussen on Sunday. The thread was about the so-called ‘Pence Card’ notion, that Vice President Mike Pence can decide which electoral votes to count on January 6.

It was obvious in the first tweet that Rasmussen was quoting someone. The rest of the thread removed all doubt. The conservative pollster was indeed quoting an article by Alexander Macris, published earlier this month. In fact, reading a bit further made it obvious Rasmussen was deeply skeptical of the whole idea.

None of that prevented the activists who spent the past four years peddling wild conspiracy theories about President Trump such as ‘Russiagate’ from reading the tweet as Rasmussen’s opinion. From there, it was quickly projected to the entire Republican party and conservatives in the US in general.

“The leading conservative pollster is demanding the Vice President of the United States refuse to count electoral votes from certain states because that’s what Stalin would do,” proclaimed Resistance Twitter megastar Pe, alias 4everNeverTrump (143,000+ followers).

“Rasmussen quoted Stalin as a way of highlighting what the Republicans could do to overturn the 2020 elections,” claimed someone named J. Rehling  (101,000 followers), adding, “All the sense is gone from Republicans. All of it. The last atom.”

“Rasmussen Reports is telling Mike Pence to take some tips from Josef Stalin on how to steal an election. This is the absolute state of American conservatism,” was the judgment of “former Mormon, former conservative” Matthew Sheffield.

Sheffield actually bothered reading more than the first tweet, but he still didn’t realize it was an extended quote, and attributed it to the pollster.

Not surprisingly, all this wailing and gnashing of teeth combined to make “Stalin” a major Twitter trend on Monday. So much so, Rasmussen noticed and commented on it.

“The usual partisan hacks are feigning upset that our analysis & commentary piece from Alexander Macris yesterday included a top quote from Stalin. Well it does,” the pollsters tweeted. “The hacks don’t want you to READ that commentary. They’d much rather finger us as Staninists. [sic] What a sad bunch.”

Macris himself actually noted in the article that there is no evidence Stalin ever actually uttered the words, but that they are attributed to him and seem to fit the situation – namely, the dispute over how some votes were counted in the 2020 US presidential election. It didn’t seem to matter, as everyone was too busy hyperventilating online to do something as simple as read.