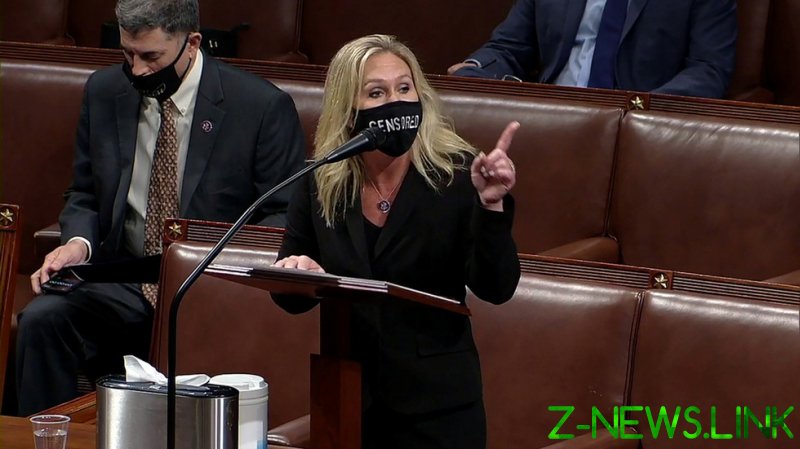 The upstart legislator said on Wednesday night that she would immediately push for impeachment one day after Biden’s inauguration on January 20, adding that she is “proud to be the voice of Republican voters who have been ignored.”

“I would like to announce on behalf of the American people, we have to make sure that our leaders are held accountable,” Taylor Greene told Newsmax. “So on January 21 I will be filing articles of impeachment on Joe Biden.”

While Taylor Greene did not say on what grounds she would attempt impeachment – referring only to allegations of corruption against Biden and his son, Hunter, which well preceded his 2020 election win – she nonetheless predicted that the incoming president would “abuse” the power of his office.

Though most impeachments of federal personnel in US history have related to alleged crimes committed while in office, rare cases have seen officials removed for misconduct predating their time in government, according to the Congressional Research Service.

Despite its questionable chances for success, Taylor Greene’s impeachment threat closely resembles a similar effort by Democrats during Trump’s early months in office. In July 2017, two congressmen – Brad Sherman of California and Al Green of Texas – filed an article of impeachment accusing the president of obstruction of justice over his firing of FBI Director James Comey. With a Republican majority in the House at the time, however, the attempt never got off the ground – an outcome that could see a repeat, as the current Democrat-controlled Congress is all but certain to strike down any impeachment of Biden.

Elected to the House in November after her Democratic challenger, Kevin Van Ausdal, dropped from the congressional race and left Georgia’s deeply red 14th district uncontested, Taylor Greene has quickly garnered the attention of allies and critics alike. While Trump has personally deemed the freshman rep a “future Republican star,” her detractors were quick to condemn past statements appearing to endorse the QAnon conspiracy movement, as well as commentary deemed anti-Semitic and Islamophobic.

The controversy did little to pull down Taylor Greene’s primary run last summer, however, easily vanquishing fellow Republican John Cowan while garnering more than 57 percent of the vote.

More recently, Taylor Greene has made headlines with her endorsement of Trump’s repeated claims of endemic voter fraud in the 2020 presidential race, arguing for some time that he would remain in office despite his formal loss to Biden. That stance has incurred the wrath of House colleagues across the aisle, prompting Congressman Jason Crow (D-Colorado) to suggest expulsion for Taylor Greene and other lawmakers continuing to charge fraud, calling them “morally bankrupt,”“depraved” and “dangerous.”