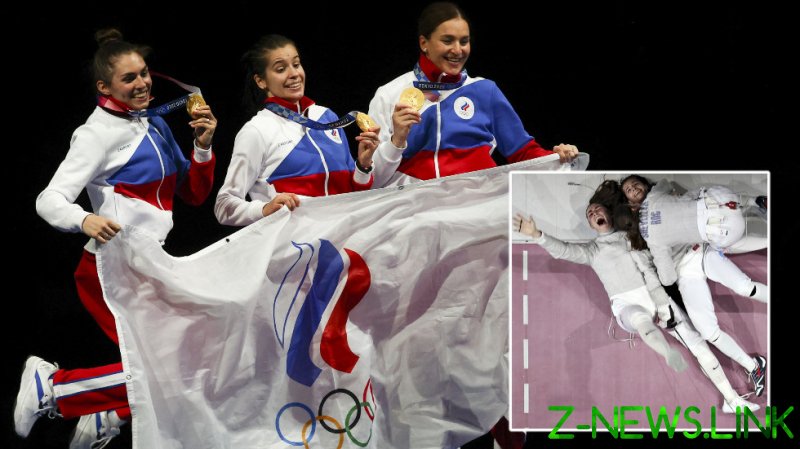 There was more glory for Russia’s formidable fencers at the Games on Saturday, with top trio Olga Nikitina, Sofia Velikaya and Sofia Pozdniakova beating France 45-41 in the women’s team sabre final to secure the latest medals won by Russian athletes.

Perhaps unsurprisingly, the title holders were favorites thanks to the involvement of Pozdnyakova and Velikaya – finalists in the individual fencing competition, which Pozdnyakova won – and Olga Nikitina, who showed her class to decisive effect to ensure she won her debut title.

As well as their medals, the champions’ immediate reward was a message from the Kremlin. “I sincerely congratulate you and the entire coaching staff on a beautiful and convincing victory… you performed well and demonstrated excellent preparation, a firm mindset for success, skill and focus on the result,” read the glowing verdict.

“They have deservedly won an impressive number of awards of the highest standard. With their bright, spectacular, polished performances, they reaffirmed the undisputed leadership of the national school of fencing.”

Pozdniakova’s father, Stanislav, won his first fencing gold in the team event at the Barcelona Games in 1992, adding the individual crown in Atlanta in 1996, where he also captured a team title that he successfully defended in 2000.

Father and daughter were seen embracing in a moving video following her individual fencing triumph, and the 24-year-old has plenty of time to continue chasing the record held by the man who is at the Games in his capacity as the President of the Russian Olympic Committee.

“Time will tell when I have four gold medals,” Pozdniakova told Championat. “When I arrived here, I did not set myself the task of winning in individual competitions and fighting for gold in team competitions.

“This is sport – do not talk about your plans. I was thinking about taking a break but the World Championship in Egypt will be in a year, so we’ll see.

“We have our own motto: ‘Together as one, together we will win’. It’s a very old motto, made before even our generation. Since it works, we decided not to change it.

“It’s very cool to be on the podium with your teammates… there were tears and emotions with the team.

“This medal concerns not only the three of us, but also our entire team, which has been working [on this] for five years.”

Moscow-born former title winner Svetlana Sheveleva was one of those important team members, acting as a backup to the victorious three.