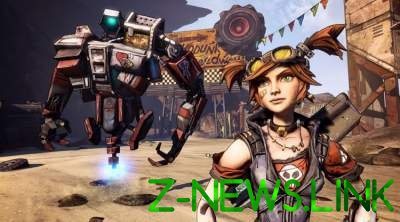 Borderlands 3 will be released September 13 on PC (Epic Games Store), PS4 and Xbox One.

The company Gearbox Software will hold the live broadcast, where the first shows the gameplay of Borderlands 3. Previously, the authors tested the function of Echocast, which will allow viewers to look at the outfit of the characters. The developers recorded a short movie and quickly deleted it, but curious users managed to upload a video and put it on the Network.

On the forum ResetEra already reviewed the 25-second demonstration. Borderlands 3 is present extended statistics for each weapon, the characteristics include a measure of amenities, as well as a division of guns on the level. Users have noticed the changed voice of Iron, tattoo of a different color from the Sirens and the return of tests, which enhance certain characteristics.

Tomorrow the live audience will hear developer comments about the innovations in Borderlands 3. They tell in detail about the flights between the planets, the abilities of heroes and many other things.

Borderlands 3 will be released September 13 on PC (Epic Games Store), PS4 and Xbox One. Steam shooter will appear in April 2020.