Published a “farewell” image of Saturn made by the Cassini 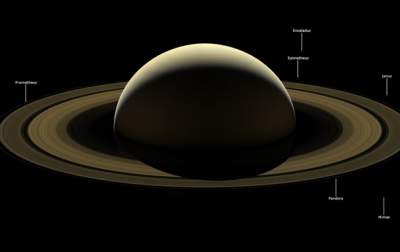 The pictures were taken two days before the destruction of the space station.

NASA released a combined image of Saturn, composed from images taken by an interplanetary station Cassini two days before her “death”.

It is reported that wide-angle station of the apparatus made 42 the picture in red, green, and blue colors from one end of the planet to the other. Later, NASA experts have made of them a single picture in natural colors.

In addition to the Saturn the picture shows in the distance the satellites Pandora, Prometheus, Janus, Mimas, and Enceladus pimeta. And to make them easier to see, the drafters of the picture left a special picture clues.

It is known that the interplanetary station Cassini burned in the planet’s atmosphere on 15 September this year.