Home / auto / Proton is preparing to introduce its first crossover

Proton is preparing to introduce its first crossover 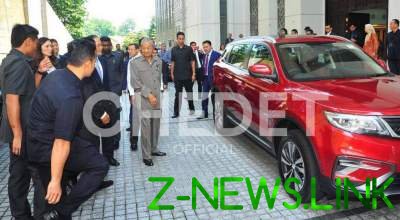 Malaysian brand Proton is preparing to introduce its first crossover. “Donor” model became the “SUV” Geely, which in China is known as the Boyue, and we have – under the name of Atlas.

A year ago, “celestial” company Geely announced the acquisition of 49.9% stake in the company Proton and 51% of the shares of the British Lotus. The deal was completed in September 2017. It is expected that the new Lotus created under the wing of Geely, will appear after 2020. But the new Proton model will hit the market very soon – it will be a crossover, the first in the line of the brand.

As expected, the SUV was not an independent development of a Proton, and a slightly turned version of the “SUV” Geely Boyue. Photos of pre-production crossover Proton appeared on the page in Facebook Prime Minister of Malaysia, Mahathir Mohamad. Judging by the pictures, the “donor” was restyled Boyue, which debuted in China at the beginning of 2018. The model Proton changed the grille, other changes in the design seems to be no.

However, photos of the stern and interior have not yet been published, and let’s not forget that these pictures show a prototype. The name under which “SUV” will be released on the Malaysian market, also kept secret.