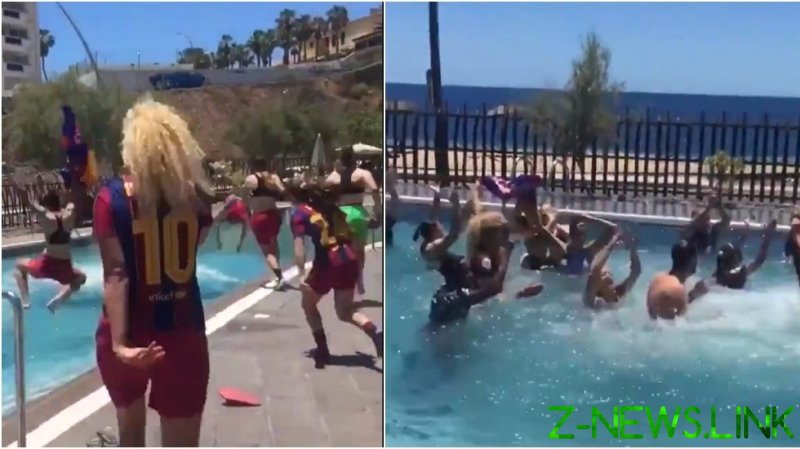 The team, which is known as Barca Femini, tasted glory on the holiday island of Tenerife after beating local team Granadilla 1-0 thanks to a Bruna Vilamala winner in the first half.

They still depended on other results, though, with bitter cross-city rivals Espanyol doing them a huge favor when holding Levante to a 1-1 draw and therefore handing a record sixth title to the Blaugrana with eight games to spare.

With 26 wins from 26 games, this a record-breaking Barca team which has now surpassed Athletic Club’s five Spanish titles tally.

Scoring 128 goals while conceding just five, they have also reached the Champions League final where they will play Chelsea in Gothenburg next Sunday.

Until then though, the Catalans deserved to let their hair down and celebrated their latest conquest with an intimate pool party.

As shirtless players swung jerseys over their head, and staff bombed into the water with them, the popular refrain of ‘Campeones, Campeones, Ole, Ole, Ole’ rang out with midfielder Kheira Hamraoui recording the action on her phone.

Then, as captain Vicky Losada brandished a Barca flag and jumped in, the tune changed to the ‘Ale Ale Ale’ chant made famous by Liverpool but also popular on the terraces of the Camp Nou.

“The league is Blaugrana because of your effort, your will and commitment.”

“Thank you for making us enjoy so much this season. We win as we are! Visca el Barça!,” he concluded.

But so did men’s team centre back Gerard Pique as well via a touching video.

Also joining him were winger Ousmane Dembele, centre back Oscar Mingueza (whose sister Ari has just broken through to the B squad), his defensive partner Ronald Araujo and 18-year-old sensation Pedri, who coincidentally hails from Tenerife.

Failing to go top of their own Liga thanks to a dull 0-0 draw with leaders Atletico Madrid yesterday, Pique is still hopeful that the men can match the women’s domestic conquests.

“Based on what has happened this season, anything can happen,” he insisted after the stalemate.

“It’s still wide open for everyone. Of course if Real Madrid win their last four games they will become champions but you have to be consistent and it’s not easy to win four matches in a row,” Pique went on.

“I think if we win all three [of our remaining fixtures] we’ll have a chance,”