Bloody office Thriller Mayhem (Mayhem) caught our attention for a long time and for obvious reasons. First, there is removed Stephen Yan from “the Walking dead”. Second, directed the picture and Joe Lynch, the Director of “wrong Turn 2”. Thirdly, the plot is the meat and fun:

The story takes place in a confined space closed at the quarantine building legal Corporation. This reveals a dangerous virus that takes people’s moral injunctions, does not allow to control himself. Ironically, this firm recently got infected from one of the murder charges. When the exits of the building are locked inside starts a real hell. Now a disgruntled employee and an angry customer should be able to fight and even kill to get to the corrupt leaders who treated them very unjustly.

Yeah, it’s like “Experiment Office”, which was bitten by a zombie.

Anyway, the script was written by newcomer Matias Caruso, but the idea, apparently, belongs to Lynch, or just very close to him. The Director argued that this is perhaps the most personal film for him. They say, and in his life there was a time when he wanted to kill everyone in his office. Familiar, huh?

Oddly enough, we still have no trailer “Pogrom”, but while you can review generously watered with the blood of stills from the film.

And already on 10 November, “Mayhem” will be released in a limited theatrical release in the United States, and will also appear on the services of VOD. 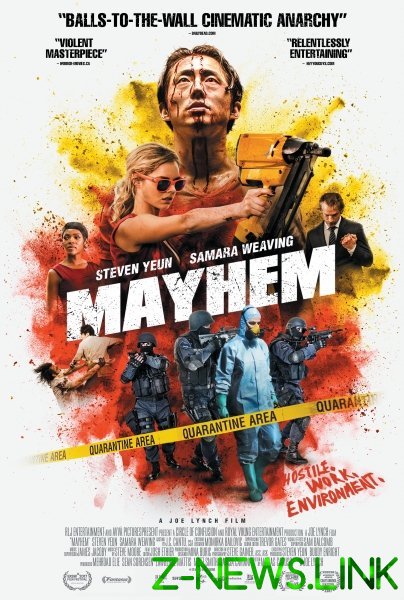