Home / Society / Panic health: why our people are not afraid of the epidemic

Panic health: why our people are not afraid of the epidemic 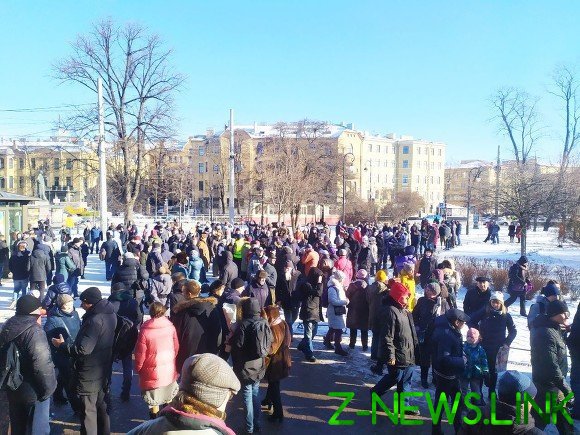 Walking down the street in a mask — I feel naked: who laughs, who looks suspiciously like a sick. Second every day more and more.

Go to the pharmacy. Masks no not only in selling but also in the pharmacists. The place is two meters from the previous client, but some cheerful old lady immediately wedged between us: “Oh, are you waiting for? But who is so worth it. And I need it fast the tablets and pills to be purchased tomorrow, they say, all will rise…”

Buying fruit at a kiosk. Follow up two boys, age nine or ten. Ask them: why aren’t you home? Answer: the grandmother sent the apples for the pie.

At the local supermarket, share their experiences in a chat room, seniors actively contribute to the stock of buckwheat and vodka. Toilet paper, however, did not take — probably to put nowhere else.

What can I say. It is not easy to observe quarantine measures in a country where there is no habit of self-discipline, no faith in the authorities, but in the subcortex sits fear that tomorrow everything will become more expensive or disappear. Twenty are relatively well fed (or rather, balanced) years turned out to be too little time to develop new habits. And old here, have not gone away.

Now, if each entrance of the store pharmacy to put on a military patrol, Yes to leaving the house without a mask immediately fined, buckwheat sold “one packet in hand”, for violation of the race in turn was deprived of the discount card and pensioners discourage walking for shopping, entering the market on the passport “for persons older than 65 years merchandise not release,” then, may have been able to avoid outbreaks. And so, I’m afraid it’s most unpleasant yet ahead of us.

It’s surprising that the Russian government does not intend to impose strict quarantine measures, even for people at risk. In France, citizens cannot leave the house without a written explanation of the dog for a walk, in Italy the head of one of the regions whether in jest, whether seriously promises to send “the police with flame-throwers” to those who do not want to respect the quarantine. And we have the elderly only mildly admonished by the opportunity to “sit at home”. Of course, if they are already retired. And the fate of the others decide to let the employer.

And this binge of unprecedented democracy too crazy. As says the post-Soviet man: it would be something serious, would all the infectious barracks driven, and if the troops in the city not entered into the apartment the exterminator not break — so not so terrible this virus is not more dangerous than the flu. And the French, Italians, and other Europeans — are just alarmists and cowards.

But there is a caveat. The difference promises. In the EU, human life has become so precious that to save her and are willing to sacrifice freedoms (in the time of trouble). If people do not understand that can infect each other, the state is obliged to do it for them, unconsciously. Really want to be wrong, but if our running around shopping for the elderly and disabled will die from the infection, will only grieve their loved ones. States in the period of wild capitalism such useless from an economic point of view, the burden is only a burden.

The most outspoken on the subject called the Minister of health of Ukraine Illya Yemets, urging business to allocate funds for medicines and medical equipment to the Ukrainians under the age of 65 years. In all, according to the Minister, the money is still not enough, so “it is necessary to allocate finances for living people, not on the (potential) bodies,” he said in an interview.

In Russia such cannibalistic statements of officials is not allowed, but the cynical attitude of “they lived” Yes “to all God’s will” — manifests itself in many ways. Including the position of the Russian Orthodox Church, whose hierarchs are not in a hurry to close the temples for the elderly, and even, on the contrary, teaches that when you receive communion from a common chalice during the divine Liturgy to be infected with the coronavirus is impossible — “because the Cup is not just bread and wine, Christ himself”. And I have not heard that someone at the top pulled the priests for intentional failure to comply with quarantine measures.

And ahead of the vote on the amendments to the Constitution and celebration of the 75th anniversary of the victory. In both cases, people without risk you can not do. Only old people do not fail when you need to ensure mass participation. According to media reports, in some regions, members of election commissions have already sent in door-to-door rounds to educate the public about the national survey. However, from the means of individual protection gave only Shoe covers — masks and antiseptics are in short supply, and the event on 22 April has not been canceled. That is, on the one hand, older people are put into quarantine, on the other — send to them a crowd of agitators in the street.

It would seem, more examples are needed, so that the people remembered in whose hands the salvation of the drowning. But, it seems, and it’s a skill that many in our country have lost. Resigned to the fact that nothing good is waiting for them ahead. That ventilation on “ordinary people” in which case you still will not be enough, but buckwheat they still have time to stock up.

Yesterday I was sure that the face of real, mortal danger syndrome of learned helplessness will give way to the self-organization of society. Because the situation is ethically very simple: save yourself, save others the same as saving others, saving yourself. Today it seems to me that this syndrome was stronger than even the instinct of self-preservation.

If it goes on, will save us only the alarmists — those that believe doctors more than the priests, and ready for a restraint of liberty not only for safety but also to preserve the health of others. How many of these alarmists lives in Russia today, and the price depends of the epidemic in our country.