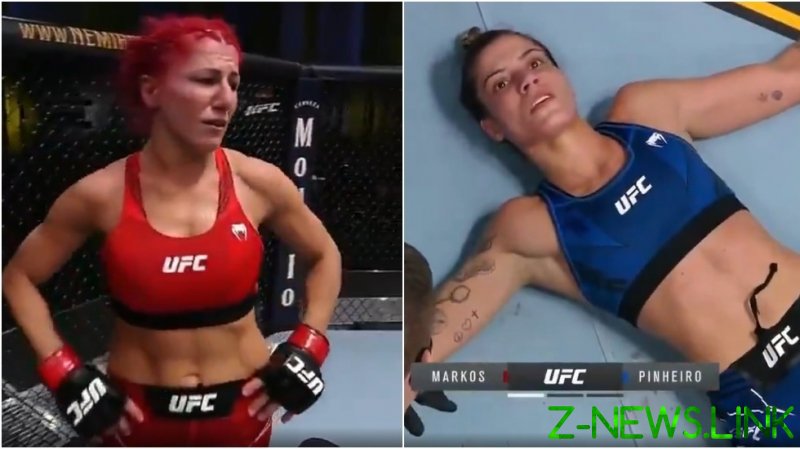 Markos was disqualified for landing an illegal kick on her Brazilian opponent towards the end of the first round at the UFC Apex on Saturday night.

After being taken to the canvas, Markos pushed Pinheiro away with her left leg before launching a kick with her right foot flush to the face of her rival.

Pinheiro, who was still on her knees, was sent flailing onto her back, where she lay prone and apparently dazed as she asked “did I lose?” before the fight was called off by referee Mark Smith.

Markos’ illegal kick was deemed intentional and she was handed a DQ defeat, with the decision being announced as Pinheiro remained on her stool. She was then carried out of the octagon by a member of her team.

The 27-year-old Brazilian – who had earned her contract with the UFC thanks to an impressive showing on Dana White’s Contender Series last November – was accused by some of deploying theatrics in her efforts to pick up a debut victory in the octagon.

For Iraqi-born Canadian veteran Markos, 35, it was a fourth defeat on the spin as her future in the world’s biggest MMA promotion was cast into doubt.

The flame-haired fighter – who shortly before her disqualification had received treatment of her own due to an accidental eye poke from Pinheiro – made her feelings towards evident in a defiant Instagram post on Monday.

“I’ve been in the fight game for a while now. I’ve never intentionally thrown a illegal blow. It’s a fight, sh*t is bound to happen,” Markos wrote.

“Yes, my foot grazed her but my opponent’s inability to continue seemed a bit oversold and suspect. I let her know after the eye poke that I wasn’t leaving that cage without a win and she stole that from me.”

Despite her losing streak, Markos signaled that she was intent on fighting on in the UFC or elsewhere.

“I’m excited about whatever is next,” Markos wrote. “I have a ton of heart in me that needs to be let out. Thank you to everyone that helped me with this camp. I love you all and I’ll be back soon.”

Markos has been a UFC women’s strawweight stalwart since making her debut with the promotion in 2014, fighting 17 times but now holding the unwanted record of becoming the first female fighter in UFC history to reach 10 losses in the octagon.