Home / WORLD / Overconfident Taiwan is playing with fire by ratcheting up tensions with China. How long will Beijing’s patience last?

Overconfident Taiwan is playing with fire by ratcheting up tensions with China. How long will Beijing’s patience last? 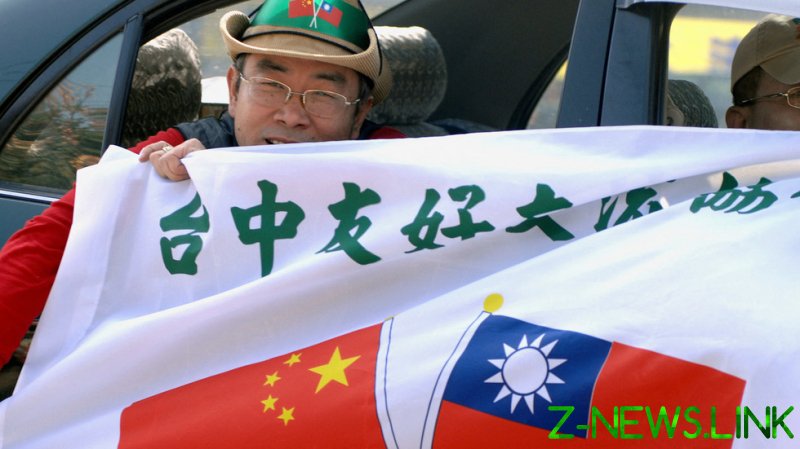 It’s been quite a week for Taiwan tensions. In the space of days, the US has stated the island should be able to participate in the UN (on China’s 50th anniversary of entry), its foreign minister is visiting Central and Eastern Europe, while anti-China MEPs announced the sending of a delegation to the island, and, just to put the cherry and icing on top of the cake, the island’s leader, Tsai Ing-wen, conducted an interview with CNN confirming US troops are indeed present on the island, as speculated.

The Global Times responded by calling for “slamming nails into the hands of the US and Taiwan to make them hurt.” There’s no question that China’s red lines over Taiwan are being pressed, if not crossed completely, and the question is, what is Beijing going to do about this, other than shouting angrily? Will it take significant risks? Or will Taipei continue to call its bluff in expanding its political space? It’s difficult not to conclude that things are approaching an ‘endgame’ now, but exactly what the end will bring is not clear.

As I’ve detailed in previous articles, Taiwan is pursuing a strategy against China that I term “provocation diplomacy.” That is, seeking to deliberately provoke China by driving wedges in Beijing’s relationships with other countries with the aim of procuring support for itself. It’s a strategy that is premised on a public relations blitz. Taipei is seeking to get as many anti-China politicians to visit it, which have included various legislators, most prominently former Australian Prime Minister Tony Abbott; encouraging direct violations of the One-China policy to forcibly downgrade China’s ties with countries, as has happened with Lithuania; giving direct access to mass media, such as CNN this week, and aggressive social media strategies, all with the goal of gaining more support in provoking Beijing into a response.

That subsequent response from China then often appears threatening or, how the US likes to describe it, “coercive,” which then subsequently rallies more support in Taipei’s favour. The ultimate goal is to undermine China’s red line, or “salami slice” it and make it more politically difficult for Xi Jinping to make the island capitulate on his terms.

However, it also rests on two fundamental assumptions, both of which are dangerous gambles. Firstly, the belief that China will not seriously contemplate military action against Taiwan due to the potential devastating consequences that would flow from it. And secondly, that in such a scenario, the United States would come militarily to Taiwan’s support, meaning the first is less likely to happen. This latter assumption appears to have been encouraged by what appeared to be an ambiguous statement, or gaffe, from Joe Biden last week when he said the US has a “commitment” to defending Taiwan. Media commentary, however, was split on how exactly to interpret this.

As of now, Beijing’s reactions have consisted of blustering a lot and making angry responses towards the countries associated with Taipei’s stunts. China talks a lot about its “red lines” and about enforcing its One-China policy. It also carries out military exercises in the Strait between it and Taiwan but, so far, it has not made any decisive move which will discourage Taipei from its current course.

But that doesn’t mean China will do nothing. Xi Jinping’s confidence in the idea of reunification, as expressed in his keynote speech two weeks ago, comes across as firm, unwavering and unfazed, a different depiction altogether to the fiery state media rhetoric. He did not threaten military action, nor did he give the impression Taiwan was “slipping away” from Beijing, so it might have to resort to desperate measures. Instead, he expressed hope in an inevitable, peaceful, reunification. Yet this all poses more questions than what it answers: how exactly will this happen? How can China achieve this? When?

One thing that should be noted about China is that it invariably chooses the right time to “strike” and has a potency for taking swift and often calculated risks in accordance with its national interests. As one example, Beijing used the West’s distraction over the Covid-19 pandemic, and the social distancing measures that were in place, to impose the national security law in Hong Kong. Previously, the scale of the protests and violence would have made that impossible.

A year on, the protest movement was effectively over, with the leading figures in jail or exiled, and most of the opposition disbanded.

Many of the strategies used by protest leaders in Hong Kong are similar to what Taiwan is doing now. They sought to gain publicity through provoking Beijing, and appealing to the world and the mainstream media to help. Their calculus? That China would institute  a violent crackdown to stop them, which would be costly and result in Beijing’s isolation and more US intervention, similar to what Taipei assumes now.

This gives us some clues, if not concrete evidence, of where things will go next. It’s very unlikely that Beijing will launch an all-out invasion of Taiwan, irrespective of whether the US would intervene or not. But it will almost certainly do something which will shift the bar so drastically in a way Taipei is not calculating, aimed at demonstrating that all these shows of public support for the island are built on sand. Taiwan is right to assume a war would be isolating and economically damaging for Beijing, but they are wrong assuming that this is the only choice available and that Beijing cannot do something else, like it did with the national security law, to simply swipe the rug from under them.

Of course, Taiwan is not Hong Kong, it is a de-facto sovereign state, so the outcome will be something different and may involve several steps. Keep an eye on the proposed “anti-secession” law proposed by China, a law that has been described as punishing “Taiwan separatists,” yet has not, for political considerations, been implemented. Other potential moves may include seizing outer islands, such as Kinmen off the Taiwan strait, closing off the waterway and regulating it, and/or sponsoring more aggressive pro-China groups and movements on the island itself. All in all, these moves would have some small consequences and risks, as did Hong Kong, but not catastrophic ones. They may, however, expose the West’s ability to respond.

This is all speculation, but the question that must be asked is, just how long will China’s patience last? A lot of people believe that Beijing is waiting until the Winter Olympics finish in January before acting, as it would not want to give countries an appetite for a boycott or another form of diplomatic humiliation.

What is abundantly clear is that Tsai Ing-wen is seeking to destroy the status quo and make it untenable for China to do nothing. Despite this irritation, Beijing seems to think that time is on its side. Taipei believes the opposite, which is why it is gunning so hard for a showdown now.  But there are plenty of reasons why seeking to force China’s hand may ultimately backfire, and that Taiwan does not have the support it thinks it has.