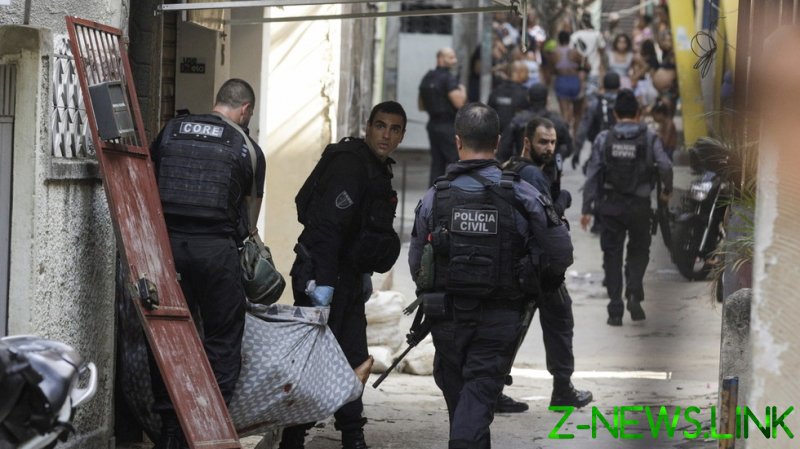 Thursday’s raid on the Jacarezinho community in northern Rio left 25 dead, including a drug squad officer who was shot in the head. The slums, also known as favelas, are notorious for rampant crime and violence. The raid was the deadliest police operation in a Rio favela since 2005.

Although police said they had only targeted dangerous criminals who attacked the officers first, the high death toll from the operation quickly drew suspicion and criticism from locals, human rights groups, and opposition politicians.

The UN, Human Rights Watch, and Amnesty International called for an independent investigation into possible extrajudicial killings by police. Jurema Werneck, executive director of Amnesty’s Brazil office, called the raid a “massacre” carried out in a slum, whose residents are “mostly Black and live in poverty.”

“Even if the victims were suspected of criminal association, which has not been proven, summary executions of this kind are entirely unjustifiable,” Werneck said in a statement.

Photos and videos shared on social media show a trail of blood on a staircase leading to an apartment, and more blood splattered on a tile floor in the room.

Residents were filmed pouring water on the pavement in an effort to remove large blood stains from the street.

One resident told AP she saw how police shot and killed an unarmed man who barged into her home and hid in her daughter’s room. The man was already bleeding from a gunshot wound when he rushed into the building, she said. An identical story was told to AFP.

AP reported that roughly 50 locals shouted “Justice!” and some raised their right fists into the air when the state legislature’s human rights commission arrived to inspect the aftermath of the raid.

Newspaper O Globo said that two commuters sustained gunshot wounds at the Triagem subway station, and a resident was shot in the leg inside his house. Locals were trapped in their homes during the shootout, the paper said, including a pregnant woman who had a C-section scheduled on that day.

Brazil’s former President Luiz Inacio Lula da Silva tweeted of the raid: “This is not public safety.” He added that unemployment and a lack of education were causing much of the violence in the slums.

The raid was slammed by opposition politicians, with some even demanding that Rio de Janeiro Governor Claudio Castro be arrested.

“We have a police that kills the most and gets killed the most, and what have we accomplished?” an MP from Rio, opposition PSOL party member Marcelo Freixo, wrote on social media. “Did we reduce drug trafficking? Did we decrease the number of homicides? Has Rio become safer?” Freixo said PSOL has also pushed for an investigation into the raid.

Castro defended the operation, which he said was based on “long and detailed investigative and intelligence work that took months.”

Brazilian President Jair Bolsonaro’s son Eduardo Bolsonaro, also an MP, accused PSOL of being detached from reality when talking about the slums. “It’s not surprising seeing that PSOL MPs are defending a criminal when a police officer has been slain on duty,” he tweeted.

“The theories of PSOL wouldn’t last a day in the reality of a favela,” Bolsonaro wrote.