Home / INCREDIBLE / On the road in the US, the turtle flew into the window of the car

On the road in the US, the turtle flew into the window of the car 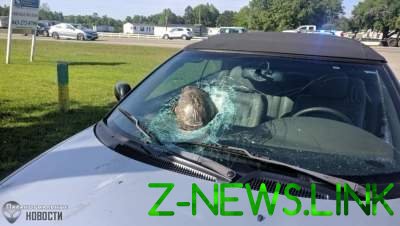 If you haven’t heard about the flying turtle, then today is the day.

A very unusual incident occurred recently on the road in the U.S. state of South Carolina. John Gardner quietly went to work that morning in his car on highway 501 in Conway near lake Busby. And suddenly something dark at high speed crashed into his windshield.

John from head to toe showered with shards of glass and he instinctively hit the brakes. When he came to, he discovered that the windshield sticks out nothing more than a normal turtle.

How the turtle gained the ability to fly, is not immediately understood. Apparently the reptile slowly crossing the road and unfortunately fell under the wheels of the truck going in front of John’s car. However, the wheel just slid on the hard shell, the turtle at the same time giving a strong horizontal acceleration.

However, even in this case, it was just unbelievable that turtle flew in the windshield, not below and not above. Like you can see more in movies like “destination” and not in reality.

“I still don’t understand why she flew from under the wheels of a truck at such a precise angle,” says John Gardner, “I was so surprised, especially when I didn’t almost nothing to see except fast flying right at me black point”.

Itself turtle did not survive the flight and died from a strong blow.

“I got no cuts, although I was showered with glass. The police then asked if I was okay because there was glass everywhere, even in my hair.”

When John got hit by the turtle in the glass, the driver riding the truck in front of him also braked and got out to check for wounded there, John. It was then that they decided that the turtle probably came under the rear wheels of the truck and therefore succeeds in riding behind the car.

This often occurs with smaller bolts and other objects lying on the roads. There are instances when taking off from under wheels of the machine bolt die even just standing on the side of the road. 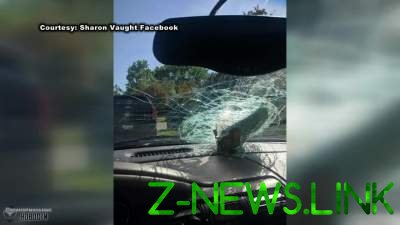 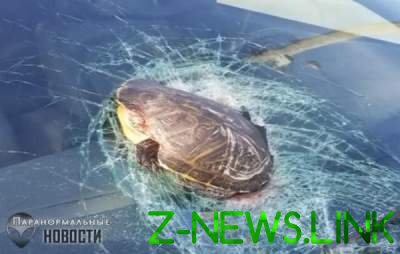