‘No redactions!’ Trump says he ordered TOTAL declassification of ALL Russiagate and Clinton email probe documents 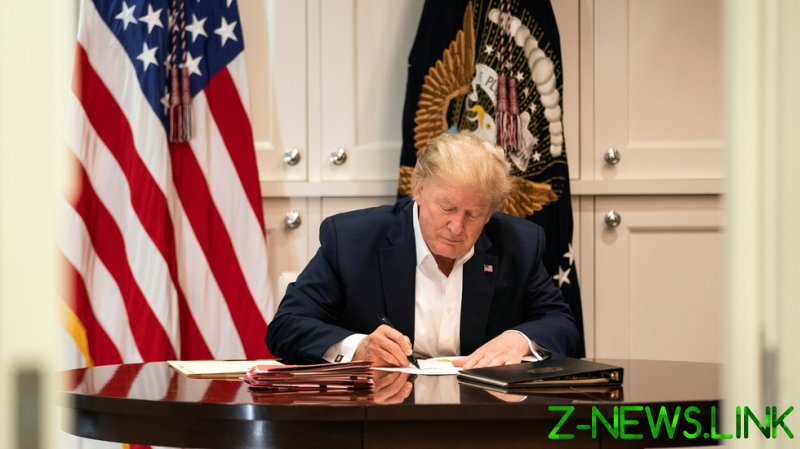 “I have fully authorized the total Declassification of any and all documents pertaining to the single greatest political CRIME in American History, the Russia Hoax,” the president said in a tweet on Tuesday night.

Trump followed up his first post with another missive stating he had declassified all information on Russiagate “long ago,” lamenting that his own personnel have “acted very slowly” to release new material.

The announcement came hours after Director of National Intelligence John Ratcliffe authorized the release of a number of documents linked to the Trump-Russia scandal, including hand-written notes from former CIA Director John Brennan, who served during the latter half of the Barack Obama administration.

The declassified notes suggest that Brennan had briefed Obama on a “plan” by then-Democratic presidential candidate Hillary Clinton to smear Trump with allegations of ‘Russian collusion’ as a means of “distracting the public from her use of a private email server” before the 2016 election.

Ratcliffe originally declassified the notes – as well as a 2016 CIA memo addressed to then-FBI Director James Comey and a Russian intelligence assessment obtained by US agencies – in late September. All three documents were mentioned by Ratcliffe in a letter to Senate Judiciary Committee Chairman Lindsey Graham (R-South Carolina), and indicated that Clinton worked to fabricate the Russiagate scandal in order to vilify her electoral rival and deflect negative media coverage. None of them were released to a broader public at the time.

Though Ratcliffe initially cautioned that the Russian assessment – which was declassified but not published – “may reflect exaggeration or fabrication,” he has clarified that US intelligence does not consider the material “disinformation.” The CIA memo, also released on Tuesday, meanwhile, reflects similar information to Brennan’s notes, discussing Clinton’s “approval of a plan concerning US presidential candidate Donald Trump and Russian hackers hampering US elections” as a way to distract from the private email server scandal, which dogged the Democrat’s campaign at the time.

Clinton’s spokesman, Nick Merrill, has deemed all of the allegations contained in the documents “baseless bulls**t.”

The new release on Tuesday comes on the heels of a number of similar publications, such as a trove of documents unsealed last month revealing FBI agents on the Trump-Russia probe had purchased professional liability insurance amid fears the investigation ran afoul of the law, which Trump has touted as proof of an attempted “coup” against him.

Allegations of Trump-Russia collusion emerged before the 2016 race concluded, with the Clinton team advancing the theory that the president-to-be worked with Moscow to throw the election, coordinating a series of hacks on Democratic computers and Clinton campaign staff while Russian operatives spread disinformation with online “troll farms.” A special counsel probe led by US Attorney Robert Mueller failed to turn up any evidence of collusion, however, resulting in no indictments directly linked to the conspiracy.