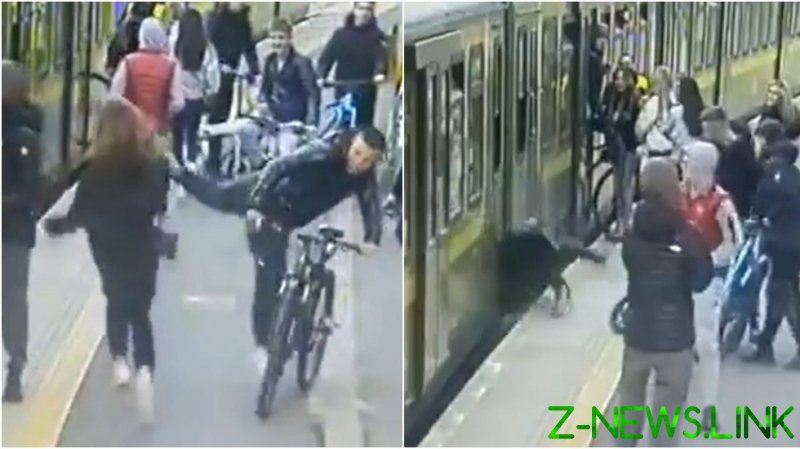 CCTV footage went viral in Ireland in recent days stemming from an incident last month at a north Dublin train station in which a gang of male youths were engaged in repeated anti-social behavior, leading to at least two women being attacked – one of whom was tripped and fell into a gap between a stationary train and the platform.

Another woman appeared to be kicked in the head while she rushed towards the train by a separate youth.

An Gardai, the Irish police, have launched an investigation into the incident which occurred on April 1 at around 9pm local time, but no arrests have yet been made.

However, with footage of the incident being viewed more than 5 million times in the past few days alone it seems that some Dublin locals have launched a campaign to identify and punish those responsible – with one alleged culprit claimed to be a promising youth player for Dublin football club Shelbourne FC.

An online petition hosted by Change.org claims to identify one of the youngsters said to be responsible, and names him as being on the books of the Irish football team. The stated aim of the petition is to have the player sacked from the football club.

“[Name redacted] was involved in the disgusting assault and harassment of a number of young girls in the DART station in Howth. This petition is an effort to ensure he is kicked off his football team: Shelbourne Football Club,” the introductory text reads.

The petition was launched on Sunday and has already exceeded its initial 5,000 signature goal, and has set a new target of 7,500.

The list of signatures has attracted Shelbourne attention too, with the Dublin City team releasing a statement Monday afternoon to say that violence against women will not be tolerated by any members of their club.

“Shelbourne FC condemns all forms of violence and anti-social behavior,” they wrote. “Shelbourne has 150 playing female members and is one of Ireland’s leading women’s football clubs. Violence against women has no place in society or in football.

“As a leading Irish football club Shelbourne FC has an extensive community and social inclusion programme.

“Shelbourne FC is aware of images, posts and video circulating on social media in relation to an incident in Howth Dart Station in which a young woman was assaulted.

“Shelbourne FC deplores and condemns the behavior shown in the video and images.

“The principle of respect means respecting the rights of all involved including the rights of a person to due process no matter how abhorrent his or her behavior may appear. This is all the more so where the allegations concern a minor.

“Shelbourne FC will deal with this matter promptly, properly and fairly.“

The club’s statement implies that the player in question is younger than 18 years of age and should be afforded the right to defend himself in the appropriate channels – but some of the petition’s signees are demanding that anyone found to be responsible be treated harshly, regardless of whether they are a promising footballer or not.

“Violent misogynists need to be prosecuted when they commit potentially fatal attacks on public transport. Not treated like football heroes,” one person wrote from California, reflecting the international attention that the video footage has received.

“These young men need to be held accountable for their violent actions,” another agreed.

“This is a horrific act, that could’ve lead to a murder. Really hope you kick him out of the team, because then what example are you giving by having him there?” added a third.