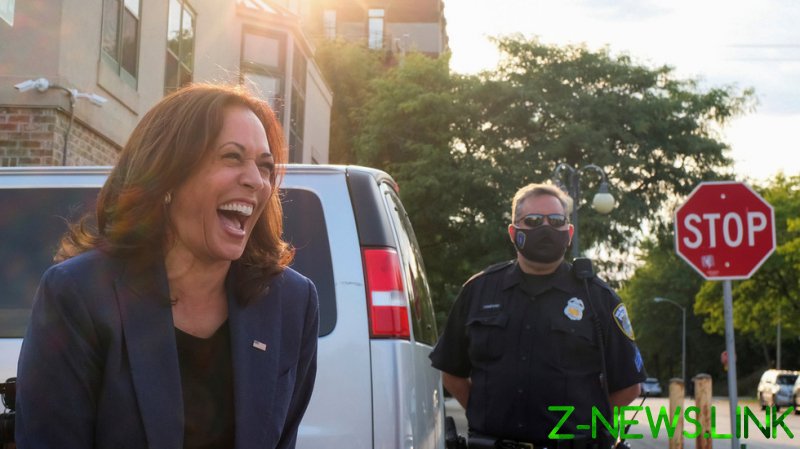 Harris met with the Blake family while on a campaign stop to Milwaukee on Monday, speaking with Jacob Blake, Jr. – the man shot seven times by police in Kenosha, Wisconsin last month during a domestic dispute – by phone as he recovers in the hospital.

“Sen. Harris had an inspirational and uplifting one-hour visit with Jacob Blake, Jr.and his family today,” Blake’s attorney, Ben Crump, wrote in a statement. “In a moving moment, Jacob Jr. told Sen. Harris that he was proud of her, and the senator told Jacob that she was also proud of him and how he is working through his pain.”

While supporters hailed the visit as a step toward “processing and healing” in the wake of Blake’s shooting – which only stoked ongoing civil unrest over police violence gripping American cities since May – Harris’ critics were quick to cry hypocrisy, citing the allegations against Blake and the Senator’s past statements about sexual assault and domestic violence.

“What about the lady he assaulted? No #MeToo now? Wasn’t Kamala all about believing all women at Kavanaugh hearing a couple years ago?” one user asked.

During the 2018 Senate confirmation hearing for Associate Supreme Court Justice Brett Kavanaugh, who was accused of sexual assault by a number of women, Harris said she believed his primary accuser, Dr. Christine Blasey Ford. Though Kavanaugh denied the charges and was ultimately confirmed to the Supreme Court role, Harris praised Ford for coming forward with her story, saying she showed “an extraordinary amount of courage.”

According to a criminal complaint filed in July, Blake was charged with felony sexual assault, trespassing and domestic abuse over an incident on May 3 and was wanted on a warrant at the time he was shot by police last month. Identified only by her initials in the document, Blake’s ex-girlfriend said he entered her home without permission, sexually assaulted her and made off with her car and debit card. Blake’s warrant has since been vacated, as he remains incapacitated in the hospital from his injuries, but the charges against him are still pending.