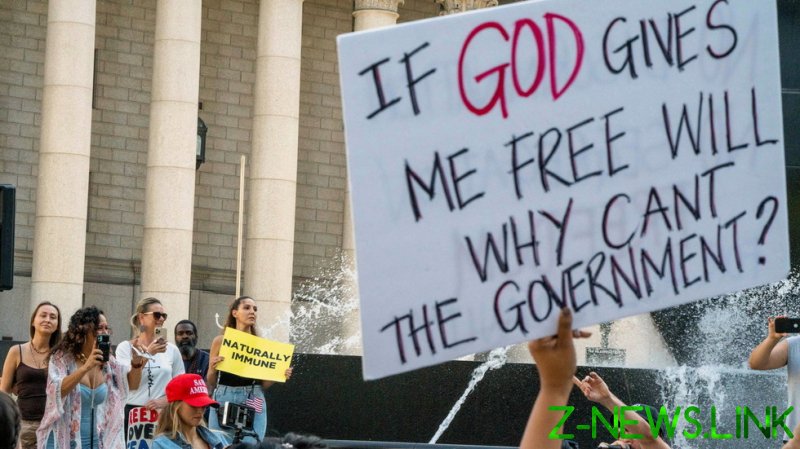 The protesters were seen marching in Manhattan, Staten Island and elsewhere in the city on Monday afternoon and carrying into the evening, with one reporter on the scene estimating a crowd of at least 1,000 in the former borough.

Marchers were heard chanting “My body, my choice!” in footage making the rounds online – echoing a slogan favored by anti-abortion activists – as well as “No means no!” and the more direct “F**k Joe Biden and De Blasio!” referring to the president and the New York mayor. Others were seen hoisting a banner opposing “medical mandates” and “digital passports” while demanding “health freedom now!”

Other demonstrations erupted upstate as well, such as in Rochester, where one group gathered to protest a vaccine mandate for healthcare workers outside the Strong Memorial Hospital.

The mandate for all hospital and nursing home staff took effect on Monday, requiring healthcare workers to receive at least one shot of a coronavirus vaccine by that date. Those who refuse to comply risk losing their job.

While employees at New York City schools – who amount to more than 150,000 people in the nation’s largest education system – were also ordered to receive their first vaccine dose by Monday, a federal appeals court blocked that move earlier this week with temporary injunction. However, the city’s Schools Chancellor Meisha Porter said she expected the requirement would ultimately be upheld, and earlier on Monday a court did just that, dissolving the injunction and allowing the mandate to go ahead. School employees will now be required to take their first shot by October 4, a three-judge panel ruled.

A protest caravan also made its way through Staten Island earlier on Monday, reportedly traveling to a number of local public schools to denounce the upcoming mandate. Led by a white pick-up, the noisy procession was seen carrying a colorful assortment of signs and banners down a busy road.

In addition to the mandates for certain types of workers, since mid-August, New Yorkers have also had to show proof that they received at least one dose of a Covid-19 vaccine, or else be barred entry to restaurants and a number of other indoor public spaces. New York was the first major city in the US to roll out such a ‘passport,’ mirroring policies implemented in France and elsewhere abroad. Other states and localities, such as Hawaii, have since adopted similar vaccine pass systems.