Home / WORLD / ‘No experience, but she’s a dog in there’: Boxing icon Shields survives storm to win MMA debut with TKO barrage (VIDEO)

‘No experience, but she’s a dog in there’: Boxing icon Shields survives storm to win MMA debut with TKO barrage (VIDEO) 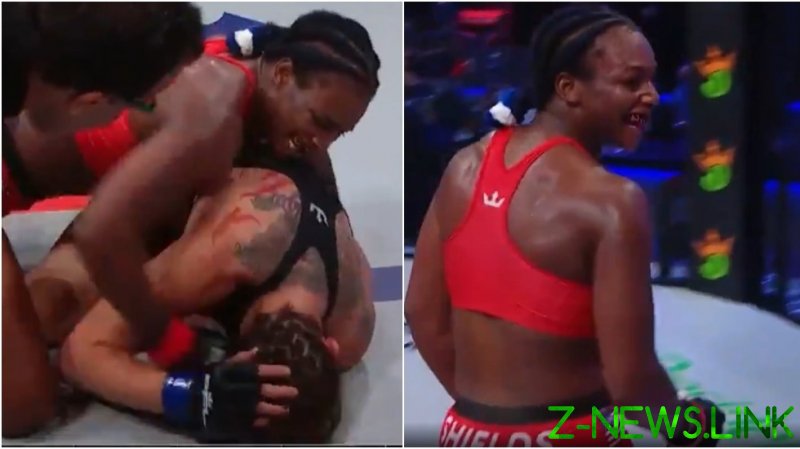 Appearing in a lightweight main event at PFL 4 in Atlantic City, two-time Olympic boxing queen Shields was dominated on the ground for much of the opening two rounds against opponent Brittney Elkin – a jiu-jitsu brown belt – but scrapped to keep herself in the fight while hinting at the threat from her punching power.

After defending another takedown attempt in the third round, Shields found herself in dominant position on the ground and took full advantage, raining a barrage of blows down on Elkin without reply.

The contest was waved off at the 1:44 mark of the round, and Shields had a win on her much-hyped MMA bow.

“I feel like I am dreaming, this is crazy,” said the three-weight world boxing champion.

“She had me on the ground, but she never hurt me,” Shields added of her opponent, who went into the bout with a 3-6 record.

“When that third round came, I said to myself, I’m going to dog her… I am not going to lose this fight.”

“I just had a never quit attitude every round. Never give up, that’s what I told myself.”

Shields – the self-proclaimed ‘GWOAT’ of women’s boxing – has switched her focus to the world of MMA, talking up the potential financial benefits compared to stepping into the ring.

Her performance on Thursday night drew widespread praise for the heart and endurance on display, especially after a ropey showing on the ground.

“Damn called it! Obviously @Claressashields has a long way to go to develop a full skill set but I am buying Shields stock for sure!” tweeted former Bellator champion Ben Askren.

“Don’t care what happens at this point Shields has more guts than all these boxers and youtubers calling out MMA fighters to box combined. Going into MMA is f*cking harrrd!” wrote women’s UFC star Angela Hill.

“Shields may not have experience, but she is a dawg in there,” said men’s UFC star Eryk Anders.

However, there was also caution that the 26-year-old needs plenty of work before being anywhere near the same conversation as the likes of undefeated PFL lightweight champion Kayla Harrison.

“Claressa Shields being the one to challenge Kayla Harrison in the PFL was a fun premise while it lasted, but I think it will be years before Shields is on her level,” tweeted MMA writer Aaron Bronsteter.

“She’s been built up like a monster and beat a 3-6 fighter who held onto a backside leg for WAY too long…,” said one fan.

While opinions were mixed, one thing seems certain – after a successful start, we’re likely to see plenty more of Claressa Shields in the cage.