New York Times ‘bounties’ non-story shows US/UK media has got so used to blaming Russia, it’s basically now doing it out of habit 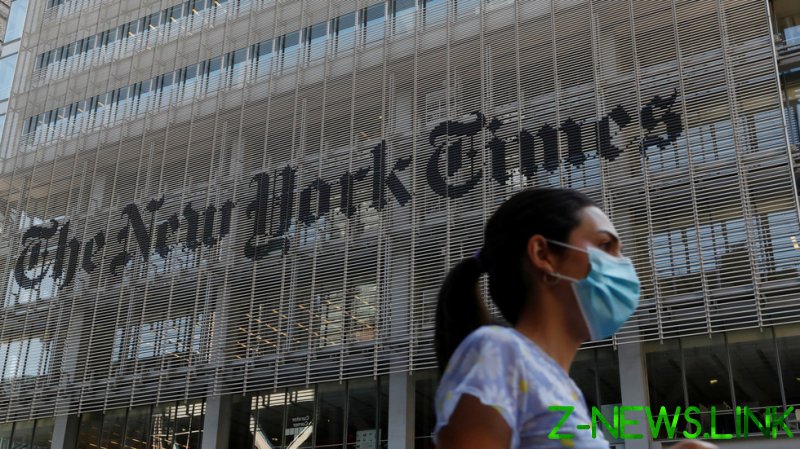 “A Powerful Russian Weapon: The Spread of False Stories.” So ran a headline in the New York Times in August 2016. If it were only a Russian phenomenon, the world would be a much better place. Alas, the Times is far from immune from spreading “false stories” itself. From Walter Duranty’s reporting from the Soviet Union, through Judith Miller’s articles on Iraqi weapons of mass destruction, up to its coverage of accusations that US President Donald Trump had colluded with the Russian government, The New York Times has had its fair share of “fake news” experiences.

“A little tiny bit flat footed,” was how the Times executive editor Dean Baquet described the newspaper when the Mueller investigation failed to find Trump guilty of collusion. “I mean, that’s what happens when a story looks a certain way for two years. Right?” added Baquet.You have to feel a bit for him. He really believed in collusion. In his eyes, it did “look a certain way.” It was rather embarrassing when he turned out to be completely wrong.

The New York Times’ iffy relationship with reality is back in the news today. US presidential spokesperson Jen Psaki admitted that the US intelligence community was not at all convinced by accusations first aired in the Times that the Russian government had paid bounties to the Taliban in Afghanistan to kill American soldiers. Rather, it had only “low to moderate confidence” that the story was true. Psaki explained:

The accusation against Russia appeared in The New York Times in June last year.The Times then followed up with additional stories on the same topic. “Afghan Contractor Handed Out Russian Cash to Kill Americans, Official Say,”claimed the headline of a second article. “How Russia Built a Channel to the Taliban, Once an Enemy,” read the headline of a third.

Commentators soon pointed out problems. While the CIA had moderate faith in the claim, the National Security Agency didn’t. In any case, the primary sources of information were Afghan prisoners who hadn’t themselves been involved in the alleged transaction. Their claims needed to be treated with a fair degree of caution.

Others pointed out that the story didn’t make any sense from a Russian point of view. The Russian government values the stability of Afghanistan, and had consistently supported both the Afghan government and the US military presence there. There was no obvious motive for killing Americans.

Furthermore, it’s not as if the Taliban needed to be incentivised to fight America. They were already killing as many Americans as they were able to. Paying them to do what they were doing already would have been odd, to say the least.

Now, Ms. Psaki admits what people have long since suspected: that the accusation against Russia is not well-founded. But anyone with any sense realized that from the get-go. Why, then, did The New York Times report it?

The Times’ explanation is that the story was true. It didn’t say that the accusation was accurate; it merely reported the accusation. In an article on Thursday, Times reporter Charlie Savage notes that the newspaper had stated that the CIA had only “medium” confidence in the story and the NSA had “low” confidence. It had also reported that the Afghan prisoners who recounted the story hadn’t actually been present when the alleged meetings with Russians took place. In other words, The New York Times’ reporting was accurate.

Maybe so, but that begs a question – why report a story that makes an extremely explosive allegation if you’re not at all confident that the accusation is true? Isn’t there some responsibility to hold off from repeating libelous claims until such time as you can substantiate them?

Apparently not. It seems as if the Times wanted to believe the story. It “looked a certain way,” to use Dean Baquet’s phrase. Which in turn begs another question. Why did it look that way to the Times?

The obvious answer is that it fitted the political needs of the moment. For the real target of the Russian bounty story was never Russia but Trump. Its purpose was to show that the president had in some way betrayed America’s soldiers by continuing to talk to Russia even though he had evidence that the Russians were killing Americans.

The speaker of the House of Representatives, Nancy Pelosi, thus remarked, “The administration’s disturbing silence and inaction endanger the lives of our troops and our coalition partners.”Meanwhile, then presidential candidate and now president, Joe Biden, responded to the story by saying that Trump’s “entire presidency has been a gift to Putin, but this is beyond the pale. It’s a betrayal of the most sacred duty we bear as a nation to protect and equip our troops when we send them into harm’s way. It’s a betrayal of every single American family with a loved one serving in Afghanistan or anywhere overseas.”

Russia, in other words, was merely a pawn in an internal American political struggle. Sadly, though, this is far from an isolated incident. Furthermore, the Democratic Party and its backers in the USA have now become so habituated to spreading dubious stories about Russia that they seem to be unable to stop, even though the original political motivation has vanished. The Russian bounty wasn’t the first “false story” to appear, and it won’t be the last.