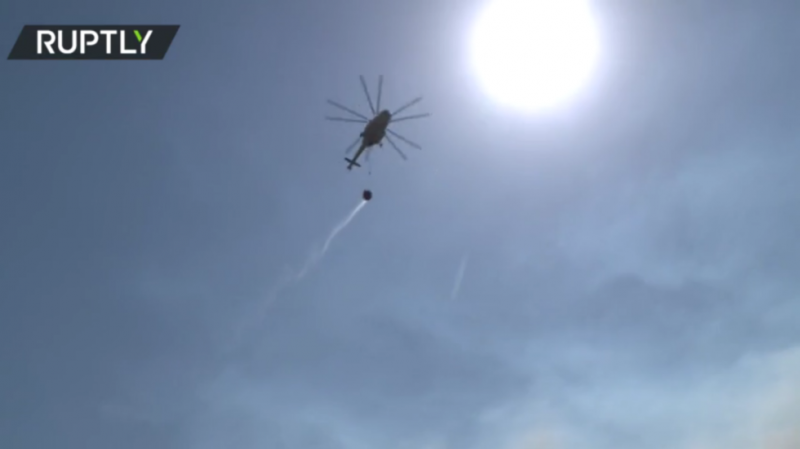 The new blaze erupted on Saturday in wooded mountains next to the popular holiday resort town of Bodrum located on Turkey’s Aegean coast. Footage from the scene shows a wall of fire towering above the town.

Some residential areas and several hotels immediately threatened by the flames have been evacuated, according to local media reports.

A herd of wild boars was filmed trying to escape the wildfire raging in the mountains around Bodrum. The ongoing blazes took a heavy toll on both wild and domestic animals, left behind by their fleeing owners.

Fires are ongoing in other locations along Turkey’s coast as well, including in the wilderness around the popular Mediterranean resort of Marmaris. Footage from the scene shows emergency crews, supported by firefighting helicopters, digging trenches and firebreaks in a bid to stop the fire from spreading.

Multiple aircraft, including a Russian Be-200 firefighting plane, sent in to help Turkey with the blazes, were spotted taking water from the sea just off Marmaris and dousing the burning mountains.

The fire outside the resort erupted just as Turkey’s President Recep Tayyip Erdogan visited the town of Manavgat, located some 75 kilometers (45 miles) east of the resort city of Antalya, which was ravaged by fire earlier this week.

The president flew over the devastated area in a helicopter, delivering a speech afterwards. Erdogan praised firefighters for their efforts to contain the fires, promising to help the devastated communities to rebuild. He also reiterated the allegations raised by top officials, that the fires ripping trough the country may have been caused by arsonists, saying that “suspicions of sabotage beset us,” and adding that police will investigate every lead.

“We cannot do anything beyond wishing the mercy of God for the lives we have lost but we can replace everything that was burned,” the president said, speaking at the crisis center in Antalya. “Our goal is to completely rebuild all victims’ houses within a year.“

Later in the day, Erdogan visited the city of Mugla, the capital of its namesake province, which is also struggling with the forest fires. Delivering a speech there, the president revealed that one suspected arsonist has been detained. Erdogan did not provide many details, stating only the detained individual is believed to be linked to a blaze near the city of Milas in the province

“It is our duty to find those who burn our forests and burn their lungs,” he stressed.

The death toll of the ongoing disaster rose to six on Saturday, as two firefighters died during efforts to control the fire in the Antalya region, according to the country’s agriculture minister Bekir Pakdemirli. Over 400 people required medical treatment amid the blazes, with 10 still hospitalized.

Thousands of people have been evacuated from their homes, with multiple residential buildings destroyed by the blazes.