Home / INCREDIBLE / Near Jerusalem discovered the ruins of an ancient monastery

Near Jerusalem discovered the ruins of an ancient monastery 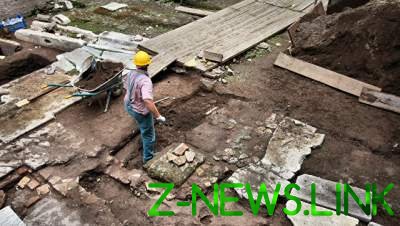 According to the head of the excavations of Benjamin of Storchan, we are talking about a large monastery with the Church of V-VII centuries of our era

Israeli archaeologists have discovered under the ruins of the ancient Byzantine Jerusalem monastery and the Church age of 1,5 thousand years with well-preserved colorful mosaics, according to the Israel antiquities authority.

According to the head of the excavations of Benjamin of Storchan, we are talking about a large monastery with the Church of V-VII centuries of our era. “We saw the size of the wall and realized that we are talking about a large monastery, which was a wonderful Church, the Convent and Church belong to the middle of V — the beginning of VII century of our era,” — said Storchan.

Sterhan explained that ancient property is just North from the valley of the ha-ELA, which is known as a place where there was a battle of David and Goliath.

According to him, at the end of the Byzantine era, the entire complex of buildings and the Church was abandoned.

On the floor of ancient buildings, archaeologists discovered the colored mosaic. “This week we got to one part of the floor with astonishing colorful mosaics… We were really surprised that the mosaic was well preserved,” added Storchan.

In the excavation of the Byzantine monastery was attended by over a thousand students of various schools and colleges. “We wanted to find a place where you can earn extra money for the trip to Poland. Archaeological excavations truly bring us closer to Israel, to our roots. Beneath my feet – the whole history of my people!” concluded the high school student Hadas Kate.