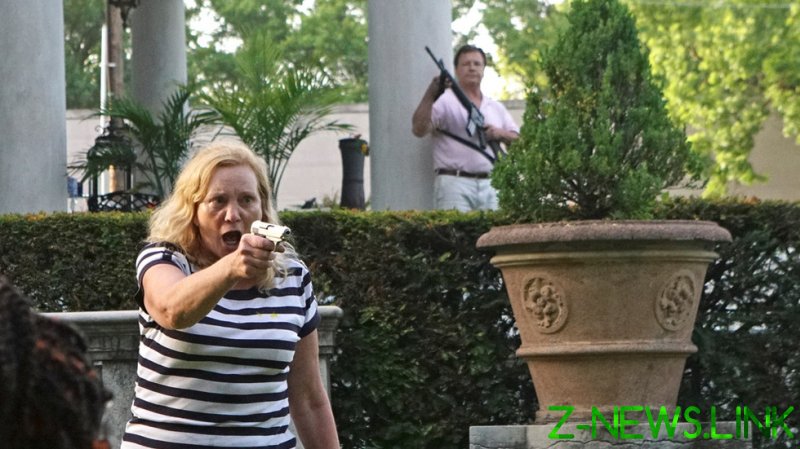 The Republican governor announced the move on Tuesday alongside 10 other pardons, noting the decision was made in late July. Mark McCloskey previously pleaded guilty to fourth-degree assault and was slapped with a $750 fine, while his wife Patricia was fined $2,000 on a second-degree harassment charge.

The legal trouble stemmed from a June 2020 incident in which the couple, both aged in their 60s, pointed firearms at a passing group of Black Lives Matter protesters, who entered their upscale neighborhood to demonstrate near the home of the St. Louis mayor.

The McCloskeys have argued the protesters broke down a gate into the community and were trespassing on a private street, also claiming they felt threatened by the crowd, but were nonetheless charged.

Initial felony counts for the unlawful use of a weapon and evidence-tampering were later reduced to lesser misdemeanors, to which the couple pleaded guilty in June. The handgun and rifle involved in the incident were seized by the state and destroyed, though the McCloskeys made a point to show off a newly purchased AR-15 soon after.

The couple’s lawyer, Joel Schwartz, said on Tuesday that his clients were adamant they did the right thing and that the governor’s pardon “vindicates that conduct.”

“Mark McCloskey has publicly stated that if he were involved in the same situation, he would have the exact same conduct,” Schwartz said.

While special prosecutor Richard Callahan said his own investigation turned up no evidence that protesters who entered the neighborhood were violent or armed, a number of demonstrations descended into vandalism, looting and riots last summer, including in St. Louis, where several police officers were shot during clashes with mobs.

The McCloskeys’ confrontation with protesters occurred during a series of nationwide rallies over the police killing of George Floyd in Minneapolis, seeing the couple gain widespread notoriety and meme stardom. Governor Parson previously vowed to pardon the two “without a doubt,” arguing they are “law-abiding citizens” who were “attacked, frankly, by a political process.”

Still riding the celebrity attained last year, Mark McCloskey announced a US Senate bid in May, citing the showdown with demonstrators as inspiration. He told Fox’s Tucker Carlson “God came knocking on my door last summer disguised as an angry mob, and it really did wake me up.”