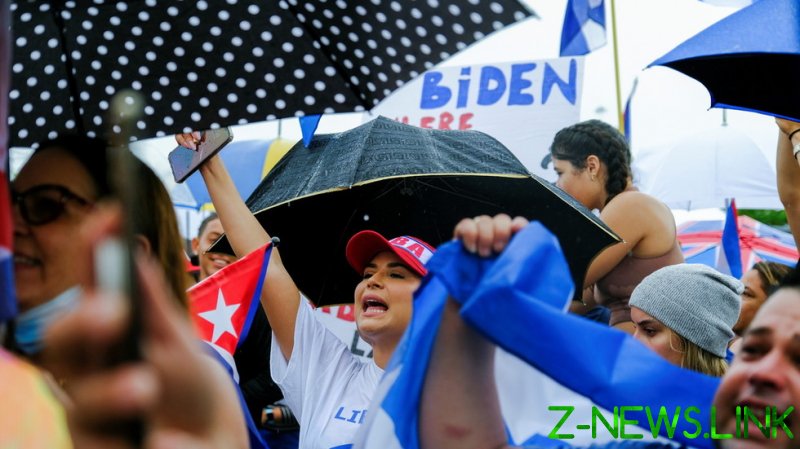 Cuba, Suarez told Fox News during a Tuesday interview, is a threat to the US because it’s “exporting communism throughout the hemisphere.” Indeed, Suarez claimed, not only is Cuba “one of the largest narcotraficantes in the region, it is a state supporter of terror as designated by the United States.”

“[Cuba] is exporting communism throughout the hemisphere and throughout the world and has been doing it for decades and that is something that should interest the national security of the US,” the mayor said. He then suggested the US take out the Cuban government by some means similar to the 1990 arrest of notorious drug-trafficking Panamanian leader Manuel Noriega, a US ally who lost his favored status after it was revealed that he had also passed intelligence to other countries, including Cuba, in defiance of Washington.

Suarez argued Panama had enjoyed decades of peaceful democracy since the removal of Noriega. Internationally, though, Panama has a questionable reputation of a tax haven for the wealthy, laid bare by the Panama Papers exposé of 2018.

But it wasn’t just Panama, Suarez explained in a separate Fox interview on Tuesday – both political parties could get behind airstrikes. Just as the Republican Bush administration took out Noriega, “you had interventions by a Democratic president taking out Osama bin Laden in Pakistan […] And President Clinton in Kosovo intervening in a humanitarian issue with airstrikes. So there have been many, many opportunities in the history of–”

The mayor was then cut off by an incredulous Maria McCallum, who asked if he was indeed “suggesting airstrikes in Cuba.” Suarez did not avail himself of the chance to back down, telling the Fox host that military intervention should be on the table.

Others simply expressed disbelief that such an idea was being uttered by the mayor of a major American city on live TV, or that anyone would back such a thing.

Some settled in for the latest round of regime-change bingo as US officials made it clear Cubans attempting to swim or boat their way to Florida would not be welcome.

One user noticed that the protest signs – supposedly anti-communist – in some footage used in Maria McCallum’s interview with the mayor had actually been edited to remove revolutionary slogans, a problem that repeatedly reared its head over the course of the weekend, with CNN using a photo of a Miami protest and the AP also captioning pro-government protests as the opposite.

While Venezuela, Bolivia, and Nicaragua are socialist, the number of people living under leftist governments in Latin America has declined precipitously over the last 50 years – in large part due to violent far-right uprisings masterminded by Washington, which saw huge numbers of political activists, leftist politicians, and union leaders killed, tortured, and “disappeared.”

While Suarez seems intent on bringing such an experience to his ancestral homeland – which largely escaped the anti-socialist violence of the 1970s after CIA efforts to overthrow communist leader Fidel Castro nearly triggered a nuclear war – Cuba got off relatively easy compared to countries like Argentina and El Salvador. The island managed to escape the Cold War with “just” the embargo, which would immerse its citizens in poverty for the better part of a century, while CIA plots against Castro ultimately failed.

Though the protests initially appeared to be targeting the government over a food and medicine shortage, US media and sympathetic Miami Cubans spun the narrative to make the discontent about communism itself. The Cuban government hit back, accusing Washington of fomenting the unrest with its blockade and accused US-paid mercenaries of instigating the protests at home.