“MEG” with Jason Stateman will release in 3D and IMAX

Next summer the audience will sail shark blockbuster “MEG” (The Meg) – 150 million (not in a row, and dollars) based on the novel by Steve Alten “Megalodon: the terror from the depths”. As you know, we will talk about the prehistoric shark.

Professor of paleontology Jonas Taylor last elite pilot deep-sea submersibles, has for many years writes about the mega and lectures, trying to forget the unforgettable, tragically ended an expedition, which has convinced him that the primal beast exists in our days. At a secret dive in the deepest ocean canyon Taylor barely escaped from the jaws of a huge prehistoric monster, capable of lifting even the t-Rex. Taylor offered to do an even deeper dive. What he might find, ought to silence the skeptics, but when this finding will be raised from the seabed, the ocean tides will be blood red until the end of time.

In the Director’s chair sat John Turteltaub, the Director of the two parts of the “Treasure.” The caste is first of all noteworthy name Jason Statema, hardly need further introduction. Is this bald dude is going to kick ass and even the shark? Sharks even have a ass?..

The film received a PG-13 rating, and with this budget, it is not very surprising. And now it became known that “MEG” will be released in formats 3D and IMAX. This could be epic, Statham because he promises the audience a cocktail of “Jaws” and “Jurassic Park”. What is necessary for the big screen.

The Russian premiere is scheduled for August 9, 2018. The distributor is the company “Karo the Prime Minister”. 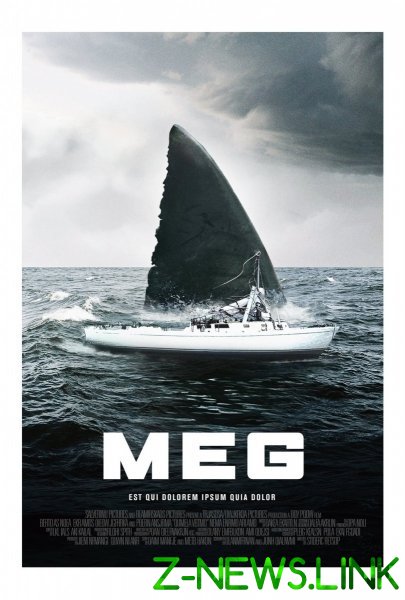