In recent days we have constantly commemorated aculo upcoming blockbuster “MEG” (The Meg). The information about the release in 3D and IMAX slip, the long-awaited first frame in a Network will emerge, and now the news from the book world.

The movie is based on the novel by Steve Alten “Meg: A Novel of Deep Terror”. In the late 90s, the book was published in Russia under the name “Megalodon”, and recently released another edition – titulnik Meg. And it’s not just a reissue: the author eventually “finished” and expanded the novel, and published the new version in a new translation. Well, for the premiere.

On the cover again there is no mention of adaptation (as in the case of “the Lady in room 13”), but in the abstract nothing is forgotten:

In the dark abyss of the ocean managed to survive the Megalodon — a giant shark that everyone thought was extinct. Research carried out in the Mariana trench, forcing a terrible predator come to the surface. The monster can sense its prey miles away, he sweeps and crushes everything it meets on its path, be it man, animal or the ship. the novel is designed in the best traditions of the genre “action”, it is quite a worthy rival of these have become classic books as “Jurassic Park” by Michael Crichton and “Jaws” by Peter Benchley,. In August 2018, the film company “Warner Bros.” plans to release on the novel of the same name, the film, which takes a famous film Director John Turteltaub (“national Treasure”, “national Treasure: Book of secrets”, “the sorcerer’s Apprentice”). The main role will be performed by Jason Statham (“lock, stock, and two Smoking barrels”, “the Italian job”). We offer readers a new translation revised and updated author version of the novel.

The book was published through the efforts of the publishing house “ABC”. 480 pages, hard cover, translated by O. Alexandrova. Technically, the release is dated to 2018, but in fact the novel has already sold. You can quietly look in the shops – both online and real. 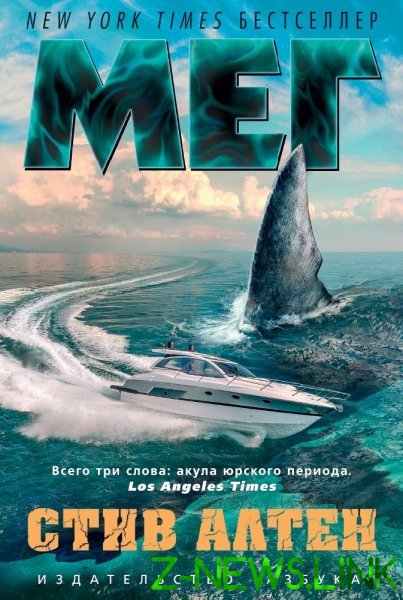