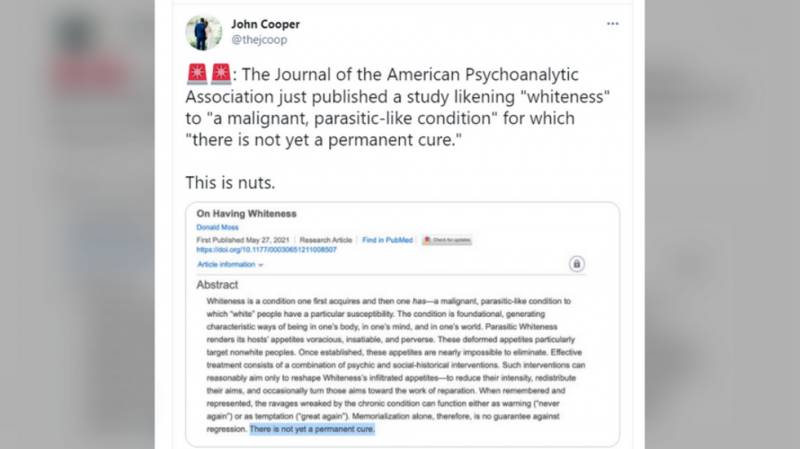 The study, which was given a platform late last month by the Journal of the American Psychoanalytic Association, went on to portray whiteness as a disorder that doesn’t yet have a permanent cure. “Parasitic Whiteness renders its hosts’ appetites voracious, insatiable and perverse,” wrote author Donald Moss, a white New Yorker who has more than four decades of experience in private practice. “These deformed appetites particularly target nonwhite peoples.”

While it’s “nearly impossible” to eliminate such appetites, Moss said, they can be effectively treated with a combination of “psychic and social-historical interventions.” But medical professionals can only hope to “reshape” those appetites for the better, such as reducing their intensity, altering their aims and, in some cases, “turn those aims to the work of reparation.”

Moss’s claims were so astounding that some observers speculated that the journal article was fictional and perhaps satirical of anti-white wokeness. But the peer-reviewed study is real, and the former New York University educator appears to have plenty of like-minded in mental health circles. Last October, the American Journal of Community Psychology published an article calling for greater awareness and understanding of “whiteness,” as well as interventions to “dismantle whiteness.”

Just last week, it came to light that New York-based psychiatrist and psychoanalyst Aruna Khilanani had lectured at Yale University in April on “the psychopathic problem of the white mind.” “I had fantasies of unloading a revolver into the head of any white person that got in my way, burying their body, and wiping my bloody hands as I walked away relatively guiltless with a bounce in my step,” Khilanani told students and faculty. She likened white patients to a “demented, violent predator who thinks they are a saint or superhero.”

The Ivy League school hosted the virtual lecture and made a recording available on its website, with restricted access. When controversy over the lecture surfaced, Yale issued a statement saying that the tone and content of Khilanani’s talk were “antithetical to the values of the school.”

Other commenters found the article chilling, likening Moss’s language to Nazi propaganda against Jews in the 1930s and suggesting that a final solution is in the works.

“The language of genocide,” one observer said, while another warned, “We should be scared. Next is hospitalizing those afflicted by whiteness, reprogramming them, then extermination of many.”