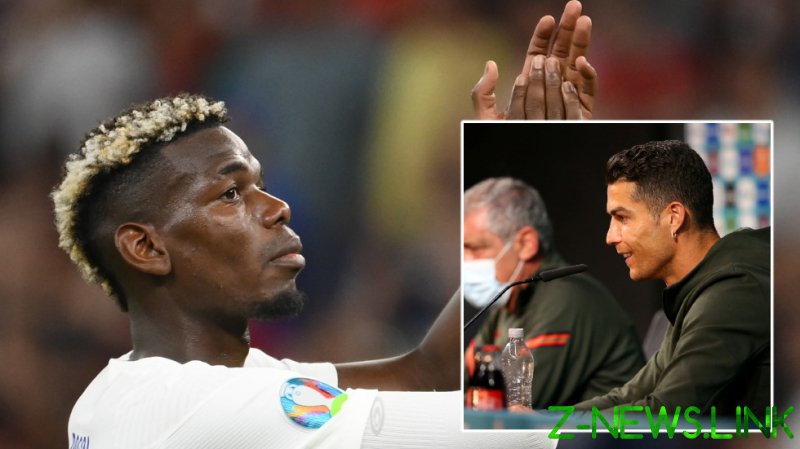 Following Cristiano Ronaldo’s lead after the Portuguese moved two bottles of Coca-Cola on before his country’s 3-0 win over Hungary, Pogba shifted a bottle of the beer after Les Bleus beat Germany 1-0 in their Group F opener.

Teams are now being asked if players and managers scheduled to appear at press conferences would oppose sitting behind Heineken 0.0 on religious grounds in a bid to avoid a repeat of the Pogba incident, according to The Telegraph.

The brand has already been placed in front of Pogba’s team-mate Karim Benzema – another Muslim – as part of his Star of the Match press conference after bagging a brace in France’s 2-2 draw against Ronaldo’s Portugal last night.

Yet the Real Madrid striker still appeared in front of a Heineken advertising board with his prize, which is sponsored by the beer company.

The development is somewhat of a U-turn after Uefa warned last week that it could start fining teams and their footballing associations if players moved drinks provided by sponsors during press conferences following the Ronaldo stunt, which was also mimicked by Italy’s Manuel Locatelli.

A line now appears to have been drawn in the sand between players who protest against being snapped with alcohol brands on the grounds of religion and health fanatics such as Ronaldo, who prefer water over Coke.

Approached for comment, Heineken are said to have responded to the Pogba debacle: “Far from promoting the consumption of alcohol, Heineken 0.0 is helping consumers decrease their alcohol intake [and is] allowing them to substitute for great tasting alcohol-free beer when it suits them, giving our consumers greater choice.”

England manager Gareth Southgate and his captain, Harry Kane, have defended Coca-Cola’s role in football, refusing to join Ronaldo’s movement, which is perhaps no coincidence as Coca-Cola is one of the FA’s main sponsors and the Spurs targetman is a Coca-Cola ambassador.

Southgate, who has also played a part in the FA’s McDonald’s-inspired work in the community, commented: “There are lots of sponsors in sport and the impact of their money at all levels helps sport to function.

“Grassroots sport in our country, particularly, requires a lot of investment and, without these companies investing, it’s very difficult to have the facilities we need.

“We are mindful of obesity and health but everything can be done in moderation,” he continued.

“Anything partaken of in moderation is rarely a problem. I understand the concerns people have and the two guys [Ronaldo and Pogba] have different rationale for their stances they took. But there’s always a bigger picture.”

“From my point of view, the sponsors are entitled to have what they want if they have paid the money to do so,” said Kane. “It’s not something I have thought about too much.

As the tournament now progresses to the knockout phases, when television and social media audiences will be even higher, it will be interesting to see the responses of different players as they carry out their media commitments.

The action resumes on Saturday, when Wales face Denmark in Amsterdam.