‘Let them drive Teslas’: Jennifer Granholm turns into a green Marie Antoinette as she lectures Americans on gas shortages 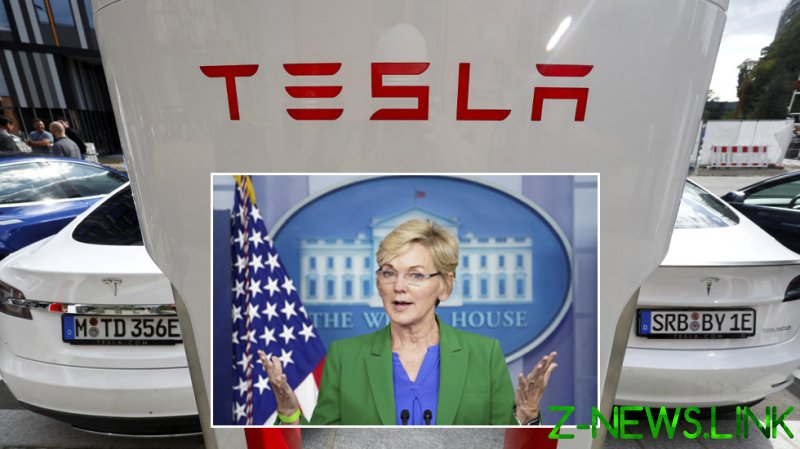 “Let them eat cake,” A phrase infamously attributed to the doomed queen of France, Marie Antoinette, when she was told the peasants had no bread, has become synonymous with out of touch elites. It illustrates the detachment of someone of great status and wealth when they speak ignorantly about the lives of the average man, for they have no comprehension of their struggle.

But in 2021, we aren’t talking about bread, we are talking about gasoline. Following a fuel shortage brought on by the Colonial Pipeline being hacked, Biden’s energy secretary, Jennifer Granholm, made (to keep the French theme going) a bit of a faux pas.

Asked about what Americans should do as lines grew ever longer at gas stations, Madame Granholm said: “Yeah, I mean, we obviously are ‘all in’ on making sure that we meet the president’s goals of getting to 100% clean electricity by 2035 and net-zero carbon emissions by 2050. And, you know, if you drive an electric car, this would not be affecting you, clearly.”

According to Yahoo Finance, Jennifer Granholm’s net worth is a million dollars. Not super-rich, but still significantly more than most Americans could ever hope to have in the bank. Given that she has served as governor of Michigan, it won’t surprise anyone that she has a healthy checking account. So talking down to normal Americans about how if they would only get with the program and buy a nice, clean electric car suggests not only sanctimony, but also that she is completely ignorant of how much electric vehicles cost.

The Manufacturer’s Suggested Retail Price (MSRP) of electric cars ranges all over the place. But the current average cost for an electric car is around $55,000; admittedly, that average is brought up by how expensive certain Tesla models are. If you look at the MSRP of lower range electric vehicles like the Chevrolet Bolt, the Nissan Leaf, or the Hyundai Kona, it averages around $33,000. The price isn’t absurd for a new vehicle, but gas-powered vehicles are still likely to be larger and have better mileage than electric alternatives. Because of this, more families will still opt for good old fashioned internal combustion when buying a new car.

There is also the fact that many Americans won’t be inclined to buy new vehicles at the moment. Thanks to lockdowns and the pandemic, many have found themselves without jobs or having to tighten their belts, so a trip to the local garage might not be that high on their agenda. On top which, this is still a free country and some people will always prefer the growl of a Mustang to the whoosh of a Tesla, and they shouldn’t be punished for making that choice.

Telling people to go and buy electric because of a temporary gas shortage is preposterous. It makes no more sense than it would to have told Tesla-driving Texans to rush out and buy F150s in February when a cold snap knocked out large chunks of the state’s electricity supply.

Jennifer Granholm clearly doesn’t really care whether or not her statements were ignorant. The Biden administration’s approach to energy has been one ‘let them eat cake’ moment after another. The entire administration comes across like a bunch of oligarchs constantly talking down to the little people on how their lives should be led, completely unaware of how difficult those lives are.