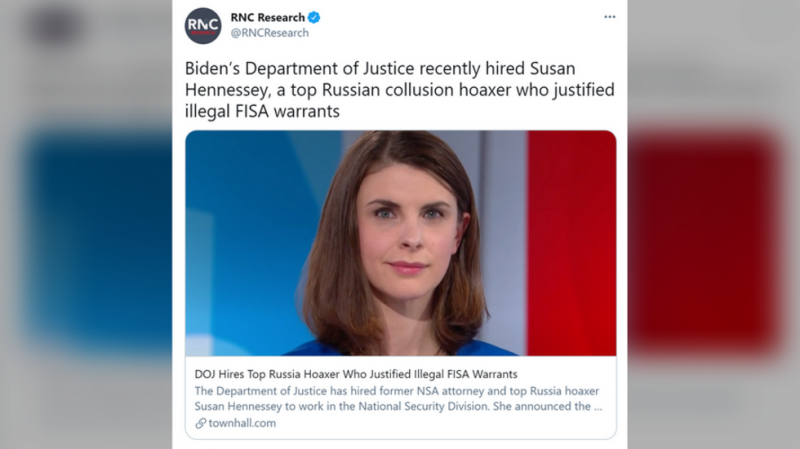 Hennessey announced the move herself after seemingly scrubbing her Twitter account of Russiagate tweets, saying on Monday that she’s “honored to be joining the extraordinary team at the Department of Justice (DOJ).” In fact, she will be senior counsel in the DOJ’s National Security Division.

In between her roles with Obama-Biden and now Biden-Harris, Hennessey served as one of the more unhinged voices of the anti-Trump “#Resistance” and supported the Russiagate propaganda campaign through jobs as CNN analyst, Lawfare blog executive editor and a senior fellow at the Brookings Institution think tank.

Responding to the appointment, journalist Glenn Greenwald called Hennessey “one of the most deranged Russiagate conspiracists.”

One of her Lawfare articles defended the widely discredited Steele dossier, suggesting that the mere fact the anti-Trump “intelligence community” had briefed the president-elect on the sordid allegations gave the report credibility. Even the fact that then-intelligence director James Clapper – later a CNN contributor and anti-Trump media activist – refrained from calling the dossier false meant that it must be at least partly true, she argued.

Hennessey’s attacks on Trump were wide-ranging, from the more minor “clearly, Melania hates him,” jab, to arguing that FBI officials “were telling the truth” when they misled the court to secretly spy on Trump campaign adviser Carter Page. She even wrote a book saying that Trump was waging “war on the world’s most powerful office.”

When then-presidential candidate Tulsi Gabbard suggested in 2019 that the US should pursue calm and better relations with Russia, Hennessey called the Democrat congresswoman “absurd.” She blasted Attorney General Bill Barr last year after the DOJ dropped charges against ex-National Security Advisor Michael Flynn, saying there should be mass resignations from the DOJ, despite a review having determined that the case against the retired general was “unjustified.”

Journalist Michael Tracey said it was “blatant, transparent corruption” for Hennessey to seamlessly transition from NSA lawyer to Russiagate propagandist, then shift right back to the “National Security State” after Trump was ousted.

“Hunter Biden getting hired to run DEA would be less absurd than Biden’s decision to hire Hennessey to work on national security law, unless of course DOJ plans to falsify evidence and illegally spy on its political opponents,” Federalist co-founder Sean Davis said. “She’s perfect for that.”