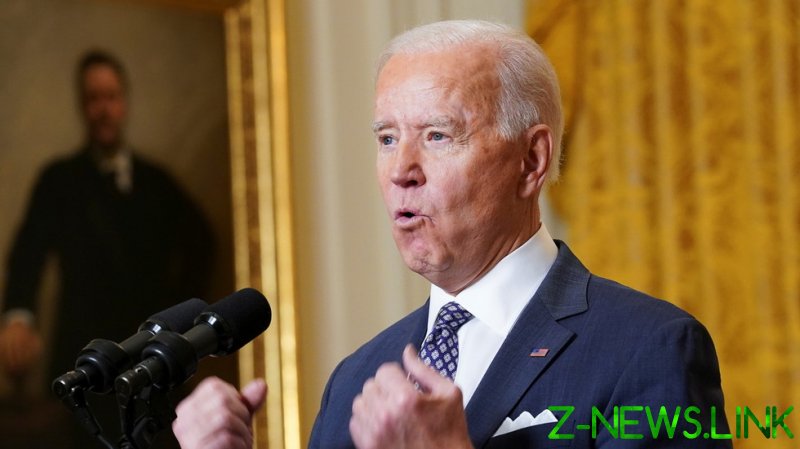 NATO has decided to expand its footprint in Iraq, following a rocket attack in the city of Erbil that killed one American contractor and injured six more people. This, as the US State Department has threatened consequences for all those involved.

NATO announced this Thursday that it will boost its Iraq mission from 500 to 4,000 personnel, which, Pentagon spokesperson Jessica McNulty confirmed in an interview with CNN, will mean the US “will contribute its fair share to this important expanded mission” – a clear indication that Biden is ready to continue his career along the warpath. The United States currently has 2,500 troops active in Iraq, following the former Trump administration’s decision to lower troop presence – a policy the Biden administration is now poised to undo.

When in doubt, blame Iran

Despite the fact there has been no confirmation as to who exactly carried out the recent Erbil rocket attack, the US State Department has vowed a response against those involved. The group that claimed the attack, Saraya Awliya Al-Dam, has since been linked by the Western press to Iran. The likes of CNN have even called the group an “Iranian-backed militia”, for which the network provided no evidence and which is a potentially dangerous assertion, as many Americans will have been given the impression that Iran was somehow responsible. Iran has since denied any involvement in the Erbil attack and says it has never backed the Saraya Awliya Al-Dam militia group.

Following Trump’s ‘targeted assassination’ of Iranian Quds Force Commander Qassem Soleimani and Iraqi Popular Mobilization Units (PMUs) Chairman Abu Mahdi Al-Muhandis in January 2020, the Iraqi parliament had voted to expel US forces from the country. Although the expulsion never occurred, US forces did begin to close down military facilities in the east of Iraq and concentrated their troop presence further to the west, in Anbar Province.

The United States invaded Iraq under the pretence of dispossessing former Iraqi leader Saddam Hussein of his non-existent “weapons of mass destruction”. Now, almost 17 years and over a million dead Iraqis later, the war is close to the age that is required for enlistment to serve in the US military.

While the US footprint seemingly expands in Iraq, Biden is also set to make his decision on whether he will follow the previous administration’s deal with the Taliban in Afghanistan and withdraw the remaining 2,500 troops, or stay in that 20-year-long war. He has until May 1 to do the former or face the backlash of breaking the Trump-era accord.

The common argument used for staying in Afghanistan is similar to the argument for remaining in Iraq. The US will argue, with the full complicity of its media, that there will be a bloodbath if they leave, due to militant groups gaining the upper hand. But when it comes to the US and its involvement in these wars, the problems in both Iraq and Afghanistan were created almost entirely by its presence.

In the case of Iraq, there had not been a single suicide bombing and no Islamic terrorist organisations, such as al-Qaeda, had operated in the country before the overthrew of Saddam Hussein.

As for Iranian influence in Iraq, the reason why this was even possible was due to the US having destroyed the country and left space for foreign groups and nations to intervene. The Iranian influence in Iraq, specifically through the aforementioned PMUs (that is, the state-sponsored umbrella organisation for militias), came as a response to Islamic State’s (IS, formerly ISIS) insurgency and occupation of Iraqi lands. Iran stepped in to help build the primary force that defeated IS on the ground inside Iraq. However, despite the fact that the PMUs are part of the Iraqi armed forces, they are portrayed simply as an Iranian proxy group akin to terrorist organisations hostile to US forces.

Along with the demonisation of Iran and its influence in Iraq being used as a partial justification for further action in the country comes the Biden administration’s continued hardball stance when it comes to re-entering the JCPOA/Iran nuclear deal.

Biden has offered to rejoin talks with Iran,on the issue of the JCPOA, dropping Trump-era restrictions such as the tight limitation of movement imposed on Iranian diplomats, but these gestures have not budged any party.

In a meeting this Thursday between US, German, French and UK diplomats, the quartet blamed Iran for the lack of progress on the restoration of the deal. The statement focuses on its reactionary enrichment of uranium, which came in the wake of US and EU non-compliance with the deal, and urged Iran to consider the “consequences of such grave action”.

In response to the statement, Iranian Foreign Minister Javad Zarif lambasted the US and E3 partners for what he calls their placing of the onus on Iran over a deal they had violated. Zarif reaffirmed Iran’s position that it would follow action with action, meaning sanctions must first be lifted and the quartet must honour its commitments before Iran will resume honouring the deal.

One of the most effective weapons the US is using to justify its aggressive posture in the Middle East is its propaganda, which works to paint its opposition as near-irredeemable. Even if Biden is going to re-enter the Iran Deal, he has now made it abundantly clear that he is not going to end hostility towards Iran and its allied forces in the region, and has already betrayed his stated goal of favouring a diplomacy-first stance.