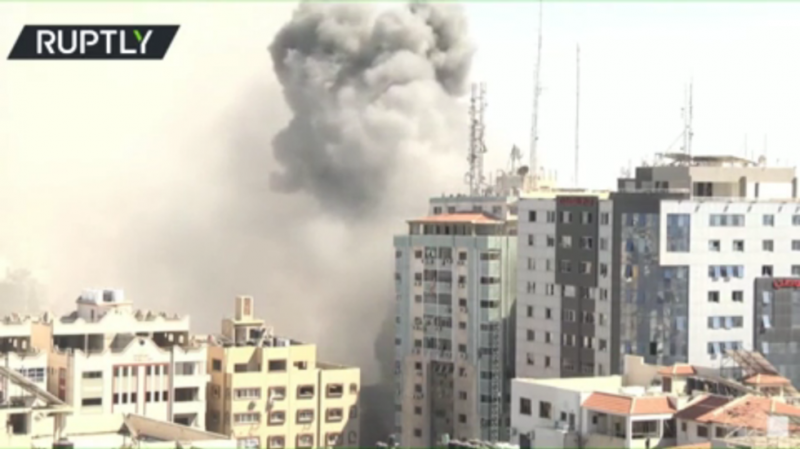 The Israeli military warned the owners of the building in advance about the strike, allowing the journalists working inside to evacuate, AP and Al Jazeera reporters including those who had worked in the building confirmed on Twitter.

When the building owner asked the IDF for some more time to let the journalists retrieve their equipment, the Israeli military denied the request, Linah Alsaafin, an Al Jazeera producer, said in a tweet.

The tower also housed a number of other offices as well as some apartments. An Israeli military spokesman told the media that the tower was targeted because it housed “Hamas military intelligence,” adding that a warning was given before the strike and those inside had “ample time to evacuate.”

Hamas uses “civilian media” as “human shields,” the IDF also said in a statement on Twitter. The Palestinian militant group “deliberately places its military assets in the heart of the civilian population in the Gaza Strip,” the post added.

It is not the first time Israel has targeted the Gaza buildings housing various media outlets. Earlier this week, the IDF also struck two high-rise towers hosting some 20 media outlets, prompting accusations of deliberate attempts to silence the local press. In all cases, the IDF gave a warning prior to the strikes.

The developments come amid an ongoing violent standoff between Israel and Palestinian militants in Gaza. The conflict was prompted by an Israeli court decision to evict several Palestinian families from an East Jerusalem neighborhood and initially led to massive protests and clashes between the demonstrators and the police followed by a massive rocket attack by the Hamas militant group targeting Israeli cities.

Israeli military intercepted most of the rockets and responded with massive airstrikes targeting Gaza. At least nine Israelis perished in rocket fire, while Gaza health officials reported over 100 killed on their side.