In the occupied Crimea once again kidnapped. Video 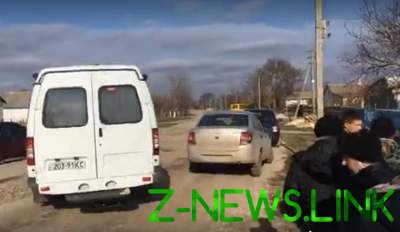 Occupants kidnapped Crimean Tatar after the so-called search of his home.

In the village of Pushkino, in the Soviet area temporarily annexed by Russia of Crimea, the invaders kidnapped Crimean Tatar after the so-called search of his home. About this Facebook informs the human rights movement of Crimean solidarity.

The report notes that the abducted villager, Mustafa Mustafaev or his son (the exact data, probably, not yet).

“In response to the outrage of local residents who gathered near the house, the security forces, planting his (stolen – ed.) in the car, said: “He expressed a desire”, – reported in the movement.

This morning, 16 November, Russian security forces conducted a “search” in the house Mustafayev and his wife Leary, as well as in housing, mother-Crimean Tatar in the same village.

It is noted that lenara Mustafayev is a teacher at a local school and leads the class with the Crimean Tatar language of instruction.

In addition, according to yet unconfirmed information, the security forces went to “search” to sister Mustafayeva in the village of Zhuravky.