In the bag of the ancient shaman archaeologists have found drugs 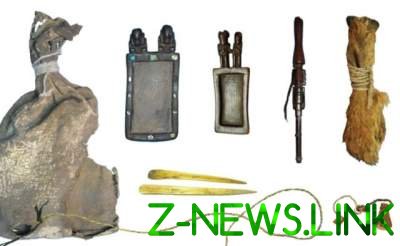 In the bag were some potent drugs.

Almost every traditional culture on Earth has used a particular method of achieving intoxication and “altered States of consciousness” – whether alcoholic beverages, Smoking tobacco or ingestion of the hallucinogenic cacti. Many Nations used them in shamanic practices and religious ceremonies, healing.

An incredibly striking example of this scientists discovered on the territory of Bolivia, on the Western slopes of the Andes.

Back in 2008, here at a height of about four kilometers was opened a rock cave with an ancient burial place. The remains of the bodies has not survived, but found a leather bag, and in it – lots of tools of the ancient “witch doctor”, including decorated pestles and flat stones for grinding plants, snuff pipe, carved in the shape of human figures, and a small bag made of Fox skins. But now an anthropologist from the University of Pennsylvania Jose Capril (José Capriles) and his colleagues presented the results of the analysis of the contents of this pouch.

In a new article published in the journal PNAS, the scientists say that here is found a very extensive set of hallucinogenic substances, most of which are not indigenous to the region, which testifies to the extensive trade relations that existed in Central and South America at the time. The method of radiocarbon dated finds period between 900 and 1100 ad. Then, in this region of the Andes was dominated by the civilization of the Tiwanaku, the ancestors of the Incas.

Over the past century plant the contents of the shaman’s pouch turned to dust, however sensitive gas chromatography with mass spectrometry allowed to identify in it the marks of the five drug compounds of plant origin: cocaine, benzoylecgonine, botofasina, Garmin and dimethyltryptamine (DMT).

Garmin and DMT found in Ayahuasca – traditional hallucinogenic brew, which some tribes of the Amazon, prepared from the juice of the vines grown here. Another source was found tryptamine derivatives served leguminous Anadenanthera, which are not found in the North-West Andes. The authors believe that extensive trade relations allowed a local shaman to obtain raw materials from different regions of South and Central America.

Then they were mixed in various combinations and proportions to create the desired for a given case of drug or “healing” magic effect.