In Rivne teenagers with a knife slashed three people 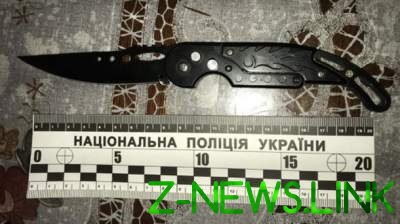 One of the injured in serious condition.

In the Rivne region, three young men after the “party” ended up in the hospital with stab wounds.

“15-year-old resident of the village of dawn and three teammates celebrated the coming of age of one of them in the cafe of the village of Orzhiv. In the same place, rested three local residents at the age of 18-, 21 – and 22-years. Between the companies the conflict started, but it quickly subsided,” – said the Rivne police.

Then the boys returning to their village, staged a brawl with old friends near one of the houses. During the fight the 15-year-old resident of Dawn, and his 18-year-old friend stabbed their “opponents” from the village of Orzhiv.

In the end, the attackers threw the wounded guys and ran away. The ambulance was called by a woman who came out, hearing the screams, and saw on his doorstep bloodied boys.

All three victims with stab knife wounds were hospitalized in Rivne Central district hospital. Two have gone on the amendment, and the third, after surgery, is in serious condition.

On the fact of hooliganism, the police started pre-trial investigation. Seized a folding knife and brass knuckles law enforcement officers will direct the examination.