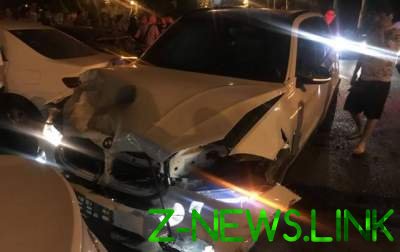 The BMW X5 was moving in the direction of the square April 10.

The BMW driver braked sharply, because of what he had blown a tire. After that the car lost control.
In Odessa on Shevchenko Avenue on Thursday evening had a serious accident with victims.

“The BMW X5 was moving in the direction of the square April 10. To meet him was a Chevrolet Cruze, whose driver tried to cross a double solid line. The BMW driver has sharply given on brakes, causing his tire burst. Having lost control, the car collided with a moving in the same direction parked Renault and Nissan Almera, Ford Fusion, Toyota Corolla and Mercedes,” – said in the message.

Suffered by the passenger of the Ford. She was hospitalized.