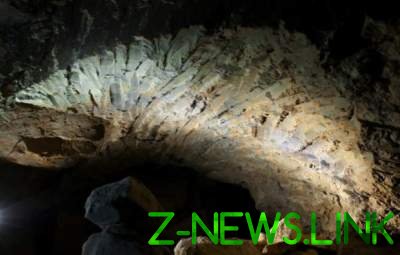 The unique monastery in the village of kov’yahy Valkovsky district of the Kharkov region is in poor condition.

According to the Deputy Director of the Kharkiv scientific-methodical center of cultural heritage of Victoria, Cerkaska, destruction occur due to the fact that access to the cave is open.

“Destroyed the elements of some, shall we say, the rock paintings that were there. There they photographed, now they’re gone. And there is information that is somehow imposed”, — she told.

Inside the cave are still niches for icons and icon lamps, the relics of the monk and chapel where the embossed image of the mother of God, but Jesus in her arms anymore. According to Victoria, Cerkaska, now the cave is guarded by the militiamen. At the same time are talking about what to do to close access to it and to carry out conservation work.

The cave was dug, roughly, in the mid-18th century. She is a clay rock, and other such in Ukraine, emphasize the scientists. It has corridors, rooms, clay painted walls, sometimes there are plant ornaments.

Head of the sector of culture and tourism Valkovsky regional state administration Valentina Shevchenko hopes that the skit can put the alarm, so that it is not penetrated by outsiders. Employees of the Kharkov scientific-methodical center of cultural heritage hope to preserve, to restore, to fully explore the monastery and then make it into a Museum.