In Egypt found the statue of the wife of Pharaoh 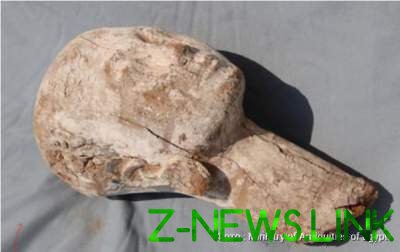 This is the second significant discovery Egyptologists on the Queen of Anjasmara II over the past few weeks.

During excavations in Egypt, was discovered the head of the statue of the Queen of Anneclaire.

The statue was created about four thousand years ago.

Mostafa Vaziri, Secretary General of the Egyptian Supreme Council of antiquities, said the head has almost human proportions, its height is about 30 cm Ears with wooden earrings.

Professor Philip Colombier, head of the excavation from the University of Geneva, said that the head was found in the disturbed layer to the East of the pyramid of Queen near the area where recently found part of the obelisk.

“Unfortunately, the bust is in very poor condition and have to rebuild before we can show it to the public,” – said Collamer.

Interestingly, a few days ago, in early October, the same joint Franco-Swiss archaeological expedition found near the Saqqara necropolis fragment of granite obelisk of Ancient kingdoms. The inscription on one side of the obelisk indicates that he was a dedicated representative of the Sixth dynasty, Anneclaire II, a relative of several of the pharaohs, mother of Pharaoh Pepi II of the Sixth dynasty. She lived in the middle of the 23rd century BC.

Thus, this is the second significant discovery Egyptologists on the Queen of Anjasmara II over the past few weeks. Now scientists expand excavation area.