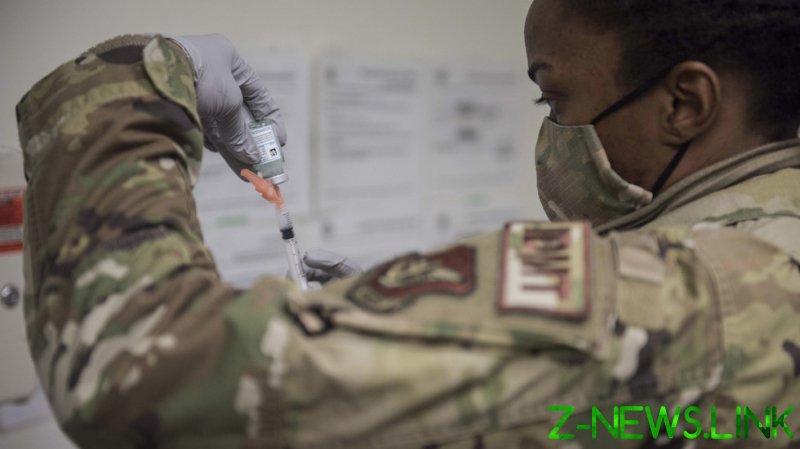 The United States military is facing a serious disease that puts its readiness at risk, but it isn’t viral – it’s ideological. As the Pentagon imposes a Covid-19 vaccination mandate on our armed forces, it’s spreading a malaise of leftist identity politics that threatens their very coherence and competency.

On August 24, Secretary of Defense Lloyd Austin released a memo instructing all members of the military, both active and reserve, to receive a Covid-19 vaccine or face discharge. “I have determined,” declared Austin, “that mandatory vaccination against coronavirus disease 2019 (COVID-19) is necessary to protect the Force and defend the American people.”

With the full support of Commander-in-Chief Joe Biden, who’s attempting to impose his own broad vaccination mandates, Secretary Austin’s decree rippled across the service branches. Deadlines began dropping for the Army (December 15 for active-duty individuals; June 30, 2022 for reservists), Air Force (November 2; December 2), and Navy and Marines (November 28; December 28). No exemptions will be made either for those who’ve already beaten Covid or for pregnant servicewomen.

“These efforts ensure the safety of our service members and promote the readiness of our force,” said Pentagon Press Secretary John Kirby.

Do they? Or, as conservative commentator Tucker Carlson asked, is this an ideological purge of anyone who doesn’t ask “How high?” when the top brass tell them to jump, even if it’s off a cliff?

Already, officers on the cusp of retirement are giving up their pensions rather than submit to what they feel is an unnecessary medical intervention. Precisely how many remains to be seen, but as of the time of writing, just under 65% of active and reserve Air Force personnel have been fully vaccinated, and almost a quarter haven’t been vaccinated at all. Whatever the true count, long-serving enlisted men and women, and experienced officers can’t easily or quickly be replaced. Despite the Pentagon’s prepared remarks, the loss of military members en masse degrades rather than promotes the readiness of the American military.

An even more shocking claim has been made by Jeff Durbin, a pastor, and R. Davis Younts, a lawyer and lieutenant colonel in the Air Force reserves: that between a quarter and a third of all active-duty Navy SEALs are rejecting the mandatory vaccine and will no longer be allowed by the Pentagon to deploy with their teams. The SEALs are perhaps the most elite and storied force in modern warfare. Losing hundreds of them wouldn’t be so much a degradation of force readiness – instead, it would be akin to sneaking up on force readiness in the dead of night and slipping a Ka-Bar between its ribs.

What’s worse, Joe Biden has indicated that he’ll oppose any measure that prevents dishonorable discharge for vax refusers. The idea that a special forces soldier would be dismissed with dishonor for declining a novel, inefficient vaccine against a disease that poses virtually no risk to him is farcical, yet it’s the reality.

John Kirby claims a mandatory vaccination program will “ensure the safety of our service members.” Never mind that military service is inherently dangerous, and that these war-fighters face death every day, both in training and when deployed. Covid has thus far claimed the lives of 46 troops, which must not be ignored, but nor should the 17 veteran suicides every day – a rate that’s remained steady since 2005 (which prompts questions about the wisdom of the Department of Defense’s new policy on active-duty members identifying as transgender – a population notorious for a 40% suicide attempt rate).

Those 46 deaths are tragic, but data from around the globe demonstrate that a mandatory vaccination program won’t cut that number to zero. Breakthrough hospitalizations and deaths continue to occur among the vaccinated. It’s worth noting that the demographic of military personnel skews significantly younger and healthier than that of the general population, so much so that the risk of death from Covid-19 for the average American soldier is less than a 10th of a percent.

Couple that with Vaccine Adverse Event Reporting System data describing the thousands upon thousands of complications after the jab, including conditions that would render an individual unfit for service, and the reticence of so many troops to be inoculated is understandable. In fact, the argument could be made that, rather than ensuring the safety of service members, a mandatory vaccination program will certainly result in a small fraction of them dying or becoming too debilitated to remain in uniform.

A vaccine-mandate policy isn’t supported by the science or the data, but it does make sense, given the association between vaccine hesitancy and more conservative politics, in the context of the far-left lurch taken by modern military leadership.

The armed forces should be the ultimate meritocracy, but competency and standards have lately been eclipsed by a baffling focus on woke identity politics. An Obama-era policy opened active-combat roles to women who could meet the same fitness standards as men, but the great majority of females fail the gender-neutral test, and now those standards may be lowered to meet diversity quotas. Does that promote force readiness?

Biden’s Chairman of the Joint Chiefs of Staff, General Mark ‘Righteous Strike’ Milley, cites his desire to understand “White rage” in his defense of Critical Race Theory – which asserts that America is inherently a racist nation – being taught in military academies.

He and Secretary Austin also see diversity as a virtue and an aim in and of itself. Military members are majority white, but include virtually every ethnicity, all equally American, all functioning as a cohesive unit. How can they help but question whether their commanding officers assume they’re racists, or that their promotions were based on skin color or gender rather than performance and merit? How can this blind pursuit of ‘diversity’ fail to result instead in division, mistrust, and discord? And does that promote force readiness?

In its brief existence, this leadership team has overseen the disastrous withdrawal from Afghanistan, punctuated by a drone strike that killed zero terrorists but seven children. One must wonder if such debacles would have occurred under a command focused more on mission excellence and less on making animated recruitment ads aimed at girls with lesbian moms.

Austin is no physician; he’s a four-star general whose stint as head of US Central Command ended in 2016, when he joined the boards of Raytheon, a defense contractor, and Tenet Healthcare, the largest operator of outpatient surgery centers in the nation. He’s influential, no doubt, positioned as he is within the government-defense-medical-industrial complex, and may “determine” whatever he likes, but the data simply doesn’t demand that the young, healthy members of the US military be forced to submit to a Covid shot or be discharged.

Soldiers are faced with life-and-death decisions as part of their job. Let them weigh the risks and benefits of receiving a Covid vaccine for themselves. President Biden, Secretary Austin, John Kirby, and the rest of the military leadership imposing this mandate on dedicated service members who neither want nor need it, at the cost of their careers and retirement, is disgraceful. The men and women of the United States Armed Forces deserve better.