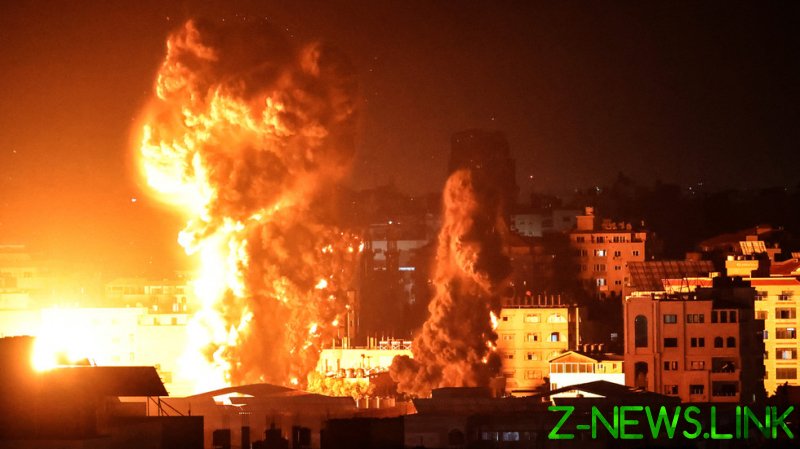 “Our fighter jets are currently striking terror targets in Gaza,” the IDF tweeted around 2am Monday, amid reports of Israeli warplanes targeting dozens of locations all across the Gaza Strip.

There were also reports of several Hamas rocket interceptions over Israel earlier on Sunday night, although on a much smaller scale than the night before.

While there were no immediate reports of new casualties, the death toll in Gaza reached 192, including 58 children and 34 women, with more than 1,200 injured by Sunday. In Israel 10 people were killed, including two children, and over reportedly 500 wounded after a week of nightly fire exchanges, most by shrapnel or while rushing for cover in bomb shelters.

The latest Israeli-Palestinian conflict escalation follows days of unrest in Jerusalem, prompted by Israel’s plans to forcefully evict several Palestinian families in an occupied East Jerusalem neighborhood. The plan triggered mass protests, which were met with a heavy-handed response. Israeli police even stormed the Al-Aqsa Mosque in the last days of the Muslim holy month of Ramadan, prompting accusations that it deliberately cracked down on worshippers. In retaliation, Hamas launched the first volley of rockets into Israel last Monday, triggering a full-scale Israeli military operation.

Prime Minister Benjamin Netanyahu repeatedly vowed that the airstrike campaign against Hamas will last “as long as necessary to restore calm and quiet to Israel’s citizens.” The IDF claims that Hamas launched over 3,000 missiles into Israel, indiscriminately, while it destroyed hundreds of terrorist targets and neutralized dozens of top operatives in pinpoint strikes.

Claiming to do its best to minimize any collateral damage among civilians, Israel dismissed any criticism of striking Gaza disproportionately. Tel Aviv argued that any perceived disparity in casualties between the two sides only proves that the IDF and its Iron Dome missile defense system are operating at an “incredible level,” while Hamas was misfiring its own rockets, and committing “double war crimes” by targeting Israeli civilians while using Palestinians as “human shields.”

With no end to violence in sight after seven days of fighting, UN Secretary-General Antonio Guterres has warned that the “utterly appalling” hostilities in Israel and Gaza could plunge the whole region into an “uncontrollable crisis.” The United Nations is “actively engaging all sides toward an immediate ceasefire,” he said, urging both sides “to allow mediation efforts to intensify and succeed.”