Home / WORLD / ‘I asked him if he was trying to kill us’: F1’s Russell details fiery exchange with rival Bottas after Imola horror smash (VIDEO)

‘I asked him if he was trying to kill us’: F1’s Russell details fiery exchange with rival Bottas after Imola horror smash (VIDEO) 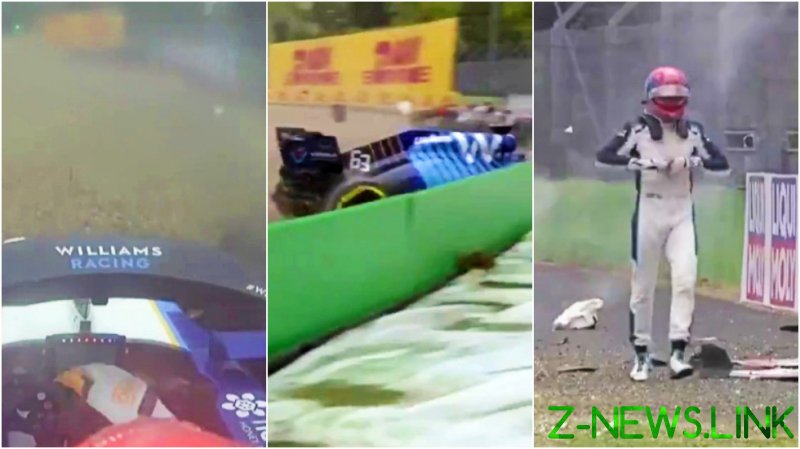 Both Russell and Bottas were in the top 10 on the 31st lap of the Emilia Romagna Grand Prix when, as Russell attempted to navigate a pass of Bottas on the outside, Finnish driver Bottas appeared to shunt his car to the right and into Russell’s path – forcing the 23-year-old onto the wet grass and causing him to lose control of his car, smashing directly into the side of Bottas’ Mercedes.

Heavy rain had led to the race being one of the more error-strewn in quite some time, with even reigning champion Lewis Hamilton coming off the track at one point – but the most high-profile incident invovled Russell and Bottas, who are understood to be rivals for a seat at world champions Mercedes next season.

The two cars then spun and smashed into the barriers at high speed. Russell’s comments on the team radio were overheard, with the young Englishman reacting furiously to his team and blaming Bottas for the smash.

Russell’s outburst certainly didn’t signal the end of his rage, as he hopped out of his car to confront the Finn and even slapped his rival’s helmet – with Bottas reportedly retaliating by raising his middle finger in Russell’s direction.

Speaking afterwards, Russell revealed what exactly was said in his brief exchange with Bottas – saying that he asked the Finn “if he was trying to kill us“.

“Thanks for all the messages. I’m fine, just disappointed,” he elaborated later on Twitter.

“At the end of the day, it’s an unfortunate incident. You’re entitled to defend your position. But at 330kph, you have to respect the speed and the conditions when doing so. Gutted for the team. They deserved more today.”

Elsewhere on the track, Red Bull’s Max Verstappen recorded his first win of the year in a season which promises to showcase a potent championship rivalry between the Belgian-Dutchman and Hamilton, who is seeking a world record eighth world title.

Haas’ controversial Russian youngster Nikita Mazepin, meanwhile, finished a Formula 1 race for the first time in his career – but both the rookie and teammate Mick Schumacher were lapped twice at the back of the field.

22-year-old Mazepin, whose father is a financial benefactor of the Haas team, had come under fire for crashing on the first lap of his F1 debut in late March in Bahrain, while also having some high-profile slip-ups during Friday’s first practice session.

The eyes of the F1 world were watching to see if the Russian driver would continue his error-heavy apprenticeship – but in the end it was Russell and Bottas who grabbed the post-race headlines after their shunt.