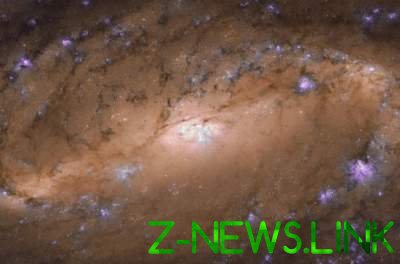 The galaxy is about 30 million light years from Earth.

Scientists using a telescope “Hubble” has received the NGC 2903 – ‘perfect’ spiral galaxy, which is located at a distance of 30 million light years from Earth in the constellation of Leo. As reported on the website of the telescope, the object is “the perfect example of spiral galaxy”.

In the picture you can see spiral arms of the galaxy, lit by the diffuse glow of thousands of stars as well as strands of dark cosmic dust. The galaxy was received “Hubble” to study the Central regions 145 a nearby spiral galaxies.

Telescope “Hubble” was launched into orbit on 24 April 1990 by the crew of the ship of reusable use “Diskaveri” and since then transmitted to Earth millions of unique images, much wider representation of scientists about the structure and origin of the Universe. A quarter of a century the camera held 1.2 million targeted observations over 38 thousands of space objects, based on which it has trained about 13 thousand scientific papers. According to experts, “this makes it one of the most powerful scientific instruments in history.”